After Republic TV’s exposé, Sunanda’s Murder case has opened up again. It is good to see a new channel evince keen interest on this case, about which, we at PGurus have written extensively. Apart from other issues, the Sunanda Murder case involves five journalists as possible witnesses. This case is very much related to journalism. Fact of the matter is that Sunanda was getting ready to speak to media to expose husband Shashi Tharoor and Indian Premier League (IPL) related issues on the fateful day of January 17, 2014. But the lady who was about to talk to TV channels was found dead on that day, killed in the most gruesome manner.

As Sunanda’s Murder case investigation drifted for the past three years, journalists revelations are welcome in the public spirit and is in the interest of justice.

All these journalists including the veteran journalist Nalini Singh had given their statements to Delhi Police in early 2015, after the registration of FIR for murder. As a dutiful journalist from the old school of journalism, Nalini Singh was the first to share the details of her interactions with Sunanda as well as police in the public domain. In such sensitive cases, such revelations can be made and typically do not hamper the investigation. As Sunanda’s Murder case investigation drifted for the past three years, journalists revelations are welcome in the public spirit and is in the interest of justice.

Rahul Kanwal also put the details in the public domain soon after giving statements to Police. He wrote a detailed post on his Facebook page. Prema Sridevi, who was working in Times Now under the same Arnab Goswami decided to reveal her versions and details few days back in Arnab Goswami’s new venture Republic TV. Whatever Republic TV’s opponents in journalism say out of envy, this step by the reporter and the TV channel is a welcome move in the interest of justice. Kudos to the media house, which forced the tardy, meandering, politically influenced probe for the past three years to be put back on the front burner. After all media’s basic job is bring out the hushed-up truth.

Who alerted Tharoor or any big IPL Mafia King or Queen about Sunanda’s plan to expose them?

What is intriguing is the silence of the two senior journalists Barkha Dutt and Sagarika Ghose, who never miss an opportunity to pontificate. What was Sunanda’s message to them? Did they go to Hotel Leela to do her interview? If not why, when this could have been the scoop of the year (and perhaps the decade)? Barkha Dutt and Sagarika Ghose owe answers to their viewers as to what they did on January 17, 2014, the day Sunanda was murdered.

One more thing. Who leaked Sunanda’s plan to give an interview to journalists? A scoop of this kind would have been guarded like it was the family jewels! How did the detractors know about Sunanda’s plan to expose Tharoor and the IPL racket, which ultimately led to her gory murder? Who leaked the communication between Sunanda and these four journalists? Who alerted Tharoor or any big IPL Mafia King or Queen about Sunanda’s plan to expose them? These angles must be investigated thoroughly.
Note:
1. Text in Blue points to additional data on the topic. 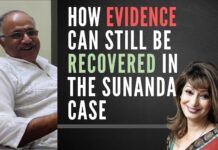