“It is not good enough for the BJP to simply make inroads in the state. We want to win at all cost,’’ said Deodhar about a month before day of voting.

If it was indeed a miracle that finally kicked out the Communists from our north-eastern State Tripura, it was not a miracle of God. Instead, it was the mighty hard work of a BJP army that’s been working there for a full year, apart from the lone warrior whom the BJP is known to frequently send as an RSS pracharak (a person who leaves his home to spread the organization’s its ideology in a selfless manner.)

One such full-time pracharak to the north-east was Sunil Deodhar, 52, an M.Sc. in chemistry from Pune University and a B.Ed. from Mumbai University. That was in 1991 when Deodhar was sent to Khasi and Jaintiya hills of Meghalaya. He worked relentlessly there for 11 years and learned not only some four tribal dialects of that state but also much more — about how the communist regime in nearby Tripura maltreated the people, deprived them of the government scheme benefits, prevented free speech and overwhelmed them with Stalinist and Bolshevik traditions.

Deodhar returned to Tripura in October 2014, he was recalled to Tripura as the prabhari (in-charge) of the BJP’s Tripura State unit.

The idea was to take these young men and send them somewhere unfamiliar, have them handle the crisis.

The seeds of the final miracle seem to have been sowed soon thereafter. After the BJP appointed its new state secretary, Biplab Deb, the BJP has been building the organization from scratch. brick by brick, to match the CPI (M) and Left Front’s cadre-based army. Over 50,000 BJP and RSS workers have been engaged, experts and trainers have been brought in from other parts of the country, and voters aggressively wooed across the length and breadth of the state.

One of the first things done was to build morchas — one for the youth, another for women. and morchas for SCs, STs, OBCs, minorities, and farmers. These morchas were first set up at the level of mandals, then district, and then at state-level. Thus, the grassroot workers reached and through them, the voters. These were set up in January last year and have become so strong now that as many as 10,000 women from three districts turned up for Prime Minister rally in North Tripura recently — the number is a huge one for such a small state.

After the morchas, came the vistaraks and panna pramukhs. The former’s main job was to pre-empt infighting in the mandals and among local leaders. There were 60 vistaraks for the 60 assembly constituencies. They did not undertake morchas (agitations); instead, met voters or be a part of the visible work. They have only one job — to troubleshoot, quell fights between leaders and workers, make sure there is no dissidence. Separate vistaraks from Assam, U.P., and Jharakhand were brought for the 36 (out of 46) operating tea gardens of Tripura because tea gardens have a specific community of tribals.The vistaraks are young men — all around 25-26. The idea was to take these young men and send them somewhere unfamiliar, have them handle the crisis and dedicate at least one year of their lives to working for the BJP in these areas. So, someone from Ghazipur would come and live in South Tripura for a year, or someone from South Tripura would be sent to live in North Tripura for a year.

The vistarak’s job was to make sure that at the local level, the party runs like a well-oiled machine.

Then there were those “page in-charge’’. Each polling booth has a voters’ list which is about 17-18 pages. Each page has a list of 60 voters. A “page-in-charge” is someone who looks after the needs of all the 60 voters on his or her list, and who is directly in touch with voters daily.

It wasn’t very difficult to woo the Congress voter who had been neglected by their party for years. The CPI (M) voters were also reached out to.

Then there was a vistarak in charge of every five booths in the state. There are 3,400 booths in Tripura and 600 shakti kendra vistaraks, many of whom were brought from Assam. Their job was to make sure that at the local level, the party runs like a well-oiled machine.

The BJP launched its ambitious online registration of voters. A phone number was advertised and the voter would simply have to give a missed call. The data was collated by the phone company and, from a call center set up by the party workers would call them back and register them. The registration grew to over two lakhs by the time of the elections were on hand.

For one year, train samparaks would travel on the daily train; they would board a train going to Dharmanagar at 6 am. They would wear Modi-T-shirts and hand out BJP pamphlets on the train. They would talk to passengers, take down their phone numbers, ask them their problems — from not having piped water to getting a gas cylinder — and pass it on to the mandals and party workers in Agartala.

Says Deodhar, “It is through the train samparaks that we managed to connect with 40,000 people in Tripura through WhatsApp. In some cases, we were able to help people through these samparaks. In one such case, a 22-year-old youth from Tripura, who was working as a driver in Saudi Arabia, was being tortured by his employer. We immediately tweeted this to Sushma Swaraj, and she had the boy reunited with his family within a week.’’

400 vistaraks were brought in from Assam who worked specifically for the run-up to the elections.

In order to train this army of workers, the BJP held training camps. Many of the workers had joined from the Congress. They had no idea about cadre-based politics. They had no ideology because the Congress has no ideology; so we gave them an ideology — of cultural nationalism, integrated humanism. A three-day workshop was conducted at the state level, and RSS workers were brought to train them. The youth would live together, eat together. They were taught patriotic songs. The trained youth would then go to districts and train others, who would then go to mandals and train others and so on and so forth.

And then, of course, there is the social media team, with video editors, graphic designers, cartoonists, young people who speak English, Bengali and Kokborok — some from IIT, others from other premier institutes, who gave a year to work out of the party’s war room in Agartala.

Some weeks ago, another 400 vistaraks were brought in from Assam. They worked specifically for the run-up to the elections. Looking at social media, helping candidates with their campaigning, giving any assistance that is required. It is not good enough for the BJP to simply make inroads in the state. We want to win at all cost,’’ said Deodhar about a month before day of voting.

That last should prove what the BJP’s objective was, the aim that brought about the saffron miracle in Tripura the other day. 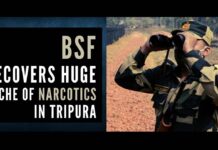