Part 1 of this series on C-Company – How Chidambaram made his fortune can be accessed here. This is Part 2.

How does one amass riches so quickly?

Cabinet ministers can be compared to crabs in a bag, each ready to pull down any one that tries to climb out of the bag. Yet, this CEO of the C-Company (P Chidambaram) could amass wealth in plain sight, much to the dismay of his equally venal colleagues! A Harvard degree combined with an evil mind, alive to all money making opportunities propelled his drive. There was also the small matter of proving to the A C Muthiahs of the world that his money was self-made.

In a hypothetical party funding meeting where each one weighs in with a money bag (all for party finances of course!), if one weighed in with five bags consistently, then that person is sure to get noticed and more importantly given a seat close to the chief. Vitamin M can overcome un-electability, lack of mass base, inefficiency, missteps and just about every other failing.

In Stocks I trust: Chidambaram

A Harvard Business School degree, a keen acumen for how Global Finance was changing the world and the extent of computerization in the Stock Market to allow computers to do the trading did not go unnoticed. Chidambaram made India’s Stock Market his battlefield and he used three Weapons of Wealth Accumulation – C-Company, P-Notes, and Media. And how he wielded them with dexterity!

A group of individuals working in the Government and outside (e. g. National Stock Exchange) whose primary loyalty was (and in some cases continues to be) to Chidambaram (PC). Placed strategically to ward/ thwart/ delay and deflect anything that can potentially harm Chidambaram or his interests, these fiercely loyal minions have been one of the biggest bottlenecks to the current administration in its pursuit of Chidambaram. But when he was a Minister, these C-Boys were powerful and wielded a big stick and would stamp on anyone who got in the way! If there was a tagline for this C-Company, it would have been along the lines of Fig. 2.

Participatory Notes, a financial instrument was tweaked by Chidambaram to create a legal way for converting Black money into White. This devious note had no name, only the amount and the issuing authority. Black money could be given to Hawala traders in India who would convert it into US Dollars for a fee and give the owner US Dollars in Dubai. Then the owner could go to a financial firm such as Morgan Stanley or Goldman Sachs and get a Participatory Note with just the value. The owner would then bring this P-Note into India (via a Mauritius company) and show it to RBI, which in turn was obligated to allow the owner to use the money to trade in the Stock Market. When a few ganged together to pump a stock, it rose to stratospheric heights and they would then dump it and make a killing. Owing to the money being invested through a Mauritius company, it was tax-free! And the resulting fortune could be converted into Dollars at any time. This created huge wealth for those shrewd enough to understand and exploit the scheme.

The media was a smaller (albeit significant) player in this scheme. When he was the Finance Minister, Chidambaram would make an off-the-cuff remark that he is considering raising tariffs on a sector (say Steel). The next day stocks of Steel companies would drop and his son would mop up these stocks. The following day, Chidambaram would reverse his stance and say that he was “misquoted” and that there is no plan to raise the duty on Steel and the stocks would get back to their original level, with Karti turning a tidy profit. This happened too many times for the media to not notice. Media seldom doubted him, even lapping up his Hindu terror theory hook, line and sinker.

Setting up a new Stock Exchange

The Bombay Stock Exchange (BSE) has been in existence for over 140 years. BSE was considered as being old and not nimble enough to be in step with changing times. Ergo a new National Stock Exchange (NSE) was formed in 1992 designed to be a fully demutualized electronic exchange[1] in the country. Chidambaram was the Union Minister of State (Independent Charge) for Commerce then. But it did not last long… On July 31, 1992, Chidambaram resigned over allegations that he had invested Rs. 1 Lakh in a scam-tainted financial services company, Fairgrowth Financial Services[2], based in Bangalore.  Chidambaram fully expected his letter of resignation to be not accepted, but the “Apara Chanakya”, Prime Minister Narasimha Rao accepted it with alacrity, having been convinced of the company’s “pedigree[3]” and Chidambaram was left to lick his wounds.

The NSE started trading electronically in 1994. NSE was the first to use V-SAT[4], a communication system that links up via the satellite that enabled electronic trading. With this move, NSE killed all regional exchanges except perhaps the BSE. In just 1 year, NSE overtook BSE. From that point forward, for the next decade or so, NSE stole a march over BSE. Two of the founders of NSE, Ravi Narain and Chitra Ramakrishna, were close to P Chidambaram and were some of his earliest recruits to the C-Company.

Looking back in time, it is clear that Chidambaram treated NSE as his favorite stock exchange. Government should treat all stock exchanges in the same way but the events that played out in the years to come show a distinct bias by PC towards the NSE. It was as if he had personally invested into the success of NSE and would give it every possible advantage.

The following example illustrates this – During the period 2010-2015, using the Stock market and gaming the market using High Frequency Trading[5] computers, a small group made up to Rs. 100 crores ($16 million) a day for 5 years at the NSE. Assuming that there are 250 trading days in a year, this works to $4 billion a year (250 * 16). Over a 5 year period, this alone would have netted $20 billion. But to be able to do this consistently, Chidambaram needed to have absolute control over a Stock Exchange. And that is exactly what happened, as it turned out later.

Use one Stock Exchange for all scams

While Chidambaram made a considerable fortune while being at the helm, it is widely believed that most of his billions were made using India’s Stock market. In the coming episodes, I will detail how he used his position and the C-Company to ensure that NSE is the only viable exchange in India and anything that came in its way was decimated. 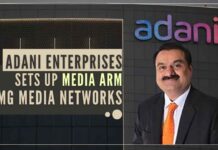 The Rotten World of Tata’s under Ratan Tata