The petitioners want us to disregard the four judicial officers, to trash the medical evidence, and, above all, ignore the verdict of the three SC judges

The Congress has disgraced itself by going ahead in its jihad against Chief Justice of India Dipak Misra, indeed against the judiciary itself. Instead of accepting the verdict of the Supreme Court on the death of CBI Special Judge Brijmohan Harikishan Loya with decorum, expected of the principal Opposition party, it is now bracing itself to impeach Misra. It is the worst instance of my way or the highway in the recent times—and that’s saying a lot, considering how dirty public life has become.

The leader of the Opposition in Rajya Sabha Ghulam Nabi Azad is said to be planning a meeting with other Opposition leaders. He has also been collecting signatures of parliamentarians from several parties; over 60 signatures are already on the petition. Such a resolution needs signatures by either 100 members of Lok Sabha or 50 Rajya Sabha members.

A newspaper report a few days ago had pointed out that former prime minister Manmohan Singh had torpedoed the impeachment move that began some time back; this explained the lull in the campaign. But, evidently, the campaign got a booster shot with Thursday’s SC judgment.

Bhushan had cast aspersions on the integrity of Justices Khanwilkar and Chandrachud.

The apex court Bench, headed by Misra, concluded that Loya had died of “natural causes.” It not only dismissed the petitions seeking inquiry into the circumstances of the death but also went on describing these as a “veiled attempt to launch a frontal attack on the independence of the judiciary and to dilute the credibility of judicial institutions.” The court did so after scrutinizing the medical and other evidence brought on record.

“The documentary material on the record indicates that the death of Judge Loya was due to natural causes. There is no ground for the court to hold that there was a reasonable suspicion about the cause or circumstances of death which would merit a further inquiry,” said Justice D.Y. Chandrachud who wrote the judgment for the three-judge Bench which also comprised Justice A.M. Khanwilkar. The Bench was scathing to the petitioners; their conduct “scandalizes the process of the court…”

The petitioners like Prashant Bhushan and Indira Jaisingh have behaved like the freebooters of the grand old party. Bhushan had cast aspersions on the integrity of Justices Khanwilkar and Chandrachud, arguing that since they come from Maharashtra, they may have known the four judicial officers connected with the case. The SC Bench rightly pointed out that “even the judges of this Bench hearing the present proceedings, have not been spared from this vituperative assault on the judiciary”.

The apex court said that the four judges “had nothing to conceal nor an axe to grind… Reading them it is clear that they have been submitted without pre-meditation. The four judicial officers acted responsibly. There was no reason for them either to hasten or to cause a delay in submitting their versions of what they knew. Each of the four judges has acted with a sense of duty. This is how they would be expected to conduct themselves, in answering to a call of duty.”

The petitioners should feel thankful to the Supreme Court that, despite their egregious conduct and its own severe remarks against them, spared them of any contempt action.

So, the petitioners and their political patrons, GOP leaders, want us to disregard the four judicial officers concerned with the case, to trash the medical evidence presented, and, above all, ignore the verdict of the three SC judges—and to believe only the fulminations of likes of Bhushan.

The apex court said: “The attempt of the petitioners is to create prejudice and to malign the dignity of the judges… This is another instance in the course of the hearing of the present case where a matter extraneous to the subject of the inquiry before the court has been sought to be relied upon to somehow sensationalize the case. What is worse is the manner in which wholly unfounded aspersions have been cast on the judges of the Bombay High Court following a decision which has been taken in the judicial capacity. This constitutes a serious attempt to scandalize the court and obstruct the course of justice.”

The petitioners should feel thankful to the Supreme Court that, despite their egregious conduct and its own severe remarks against them, spared them of any contempt action. But they remain adamant if one goes by the rambling rants of Bhushan’s on TV news channels on Thursday. 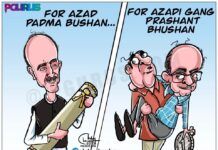 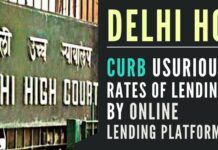 Open letter to Jagan, administer state for all Andhra people