A Delhi court on Friday denied bail to the tainted journalist–cum-fixer Upendra Rai, arrested by the Central Bureau of Investigation (CBI) for his involvement in dubious financial transactions, extortion, and forgery of documents. Special CBI Judge Santosh Snehi Mann denied the relief to Rai noting that the investigation was at its initial stage.

He was arrested for allegedly indulging in dubious financial transactions and getting an airport access pass made by the Bureau of Civil Aviation Security (BCAS) by furnishing false information.

The court noted the CBI’s submission that the time period was very less to complete investigation as the magnitude of the crime was very large. The CBI also told the court that if he was granted bail, Rai could tamper with the evidence, citing the ongoing probe on the huge money laundering and illegal huge money flow into his accounts from many shell firms. During 2017-2018 financial year itself more than Rs.100 crores landed in Upendra Rai and his firm’s accounts in mysterious ways[1].

In his application, Rai had claimed that no purpose would be served by keeping him in further custody. He had claimed he was not required for further custodial interrogation. The tainted journalist was arrested by CBI on May 3 and was in the agencies’ custody till May 9 and was sent to judicial custody. Since May 9, Upendra Rai has been cooling his heels in Tihar prison.

He was arrested for allegedly indulging in dubious financial transactions and getting an airport access pass made by the Bureau of Civil Aviation Security (BCAS) by furnishing false information. Meanwhile, Upendra Rai maintained coveted Press Information Bureau’s (PIB) Accreditation Card (No: 275) under Editor Category[2]. This PIB Card is meant for full-time journalists. But now it is found that many brokers and activists are illegally holding this PIB card to get entry into Government offices and enjoy other facilities.

The Supreme Court had on May 4 refused to interfere with his arrest. In his application seeking protection from arrest, Rai had claimed he was framed in the case because of his writings against the Enforcement Directorate (ED) Officer Rajeshwar Singh. Later Upendra Rai withdrew his complaint. He filed a petition against honest ED officer Rajeshwar Singh and it is widely seen as a covert operation by tainted former Finance Minister P Chidambaram when Supreme Court asked CBI and ED to finish the probe within six months in mid-March. The benami petition by Upendra Rai was supposed to blackmail and threaten the ED officer, who took bold action against Chidambaram.

Upendra Rai and his associate journalist Subodh Jain and their employer tainted Sahara Group owner Subrata Roy were slapped by Supreme Court in 2011 for Contempt Charges for filing fake complaints against the ED officer. These crooked people tried to arm-twist the ED officers, when they first summoned controversial lobbyist Nira Radia in October 2010. After seven years, when Chidambaram is trapped in Aircel-Maxis case, Upendra Rai rehashed his same rejected petition against the ED officer. Recently he had withdrawn his frivolous petition, supposed to be a benami operation by Chidambaram. Upendra Rai is allegedly close with top Congress leaders like Ahmed Patel and Rajiv Shukla. Though Supreme Court asked CBI to take action against Upendra Rai in 2011, the UPA regime saved him.

CBI also registered another case against Upendra Rai after the arrest. This case is for blackmailing and extorting Rs.15 crores from real estate firm owner Balvinder Singh Malhotra. The real estate firm White Lion Real Estate Developers were forced to pay more than Rs.15 crores upon the threats of Upendra Rai by showing certain adverse Income Tax documents against Malhotra. CBI in its FIR said that certain top Income Tax officers were conspiring with Upendra Rai to extort people, caught by the department[3]. 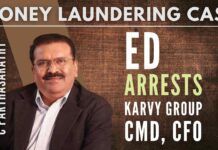