Apart from the rise in killings of political opponents, Kerala’s CPI-M Government headed by Chief Minister Pinarayi Vijayan is mired in the controversy of nepotism in top appointments in the state. Now the party General Secretary Sitaram Yechury is claiming that he is taking corrective measures on the appointment of relatives in government posts. Whether it is a serious effort or a cosmetic exercise remains to be seen.

When the top tier ministers show nepotism, what will the downstream cadre do?

Controversies started when Chief Minister’s henchman Industries Minister E P Jayarajan appointed his nephew Sudhir Nambiar as Managing Director of the Public Sector Undertaking (PSU), Kerala State Industrial Enterprises (KSIE). Sudhir Nambiar is also the son of CPI-M MP P K Sreemathi, who was also in a controversy when she was the Health Minister in the state. She appointed her son Sudhir’s wife as her cook and later promoted as Assistant Private Secretary. Mother–in-Law Minister made Daughter–in-Law as a staff member for two years and later made her resign and made her eligible for pension as a state government employee. Now Sreemathi claims, they don’t take pensions even though they are eligible. Both Jayarajan and elder sister-in-law Sreemathi, M P from Kannur are CPI-M Central Committee Members.

Jayarajan also appointed another niece Deepti as the General Manager of another PSU – Kerala Clays and Ceramics. Now as a face saver, both Sudhir and Deepti are saying that they are not interested to take the appointments. What a sacrifice, when caught? Now the rumour doing the rounds in the capital is that the opponents want the exit of Jayarajan from Cabinet. When the top tier ministers show nepotism, what will the downstream cadre do? Will they not try to emulate their leaders?

The question is whether Chief Minister will take action, though he ordered for a vigilance probe and claims to have censured Jayarajan. It is a known fact that Jayarajan is the party’s fundraiser and a trusted aide of the Chief Minister. Apart from holding the post of Member of party’s Central Committee, for many years, Jayarajan is the General Manager of the party Organ – Deshabhimani with several editions across Kerala. The newspaper also has editions in several Gulf countries also. Is it a violation of Press and Registration of Books (PRB) Act by running editions in other countries? Will it amount to a violation of Foreign Exchange Maintenance Act (FEMA)? This gives the distinct impression that laws do not apply to all.

Within five months, Pinarayi Vijayan government has made a number of mysterious appointments. First was the appointment of an un-known economist Gita Gopinath from Harvard University. Gita has nothing to do with Kerala and people were looking her up on Google, when she was appointed as Economic Advisor of Chief Minister. Grapevine talks is that this posting was a clever attempt by Vijayan to embarrass the Finance Minister Thomas Isaac. Otherwise what is the need for a US settled person to be appointed for this post? She says she will advise the Chief Minister through online. Recently she visited Kerala and committed a faux pas by stating that Chile is the suitable model for Kerala!!!

Another was the appointment of Party funded TV Channel – Kairali TV – Chief Editor John Brittas as Media Advisor to the Chief Minister. There is no issue on such an appointment. But after such an appointment, John Brittas is continuing as Editor in the TV channel and enjoys the benefits of the Press Freedom. This is against the ethics of media. It is a known secret that Brittas is the Delhi facilitator and translator of Chief Minister Vijayan for the past decade.

These things show that CPI-M has different set of rules when in power and opposition. The million dollar question is whether the Central leadership of the party can tame Vijayan, when Kerala unit is the main (only?) fundraiser of the party. 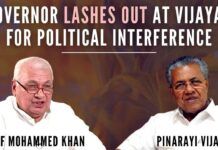