The Supreme Court of India is all set to hear PILs against and in favour of Rohingya Muslims on October 13. Those urging the Union Government and the Supreme Court to not deport the Rohingyas from India include controversial senior advocates Prashant Bhushan and Colin Gonsalves.

Congress leaders and senior lawyers like Kapil Sibal are also on the side of the Rohingyas. All Mullahs and Maulvis, all “Leftists and half-Leftists and umpteen “secular” commentators, like all Kashmiri separatists and terror organizations, have also swung solidly behind the Rohingyas. Now, they no more say that India is unsafe for the minorities in general and Muslims in particular.

It may appear ridiculous and unbelievable, but it is a fact that they have all suddenly changed their stance and started telling New Delhi not to deport them, as India is “a great democracy” and that “it has been giving a refuge to refugees from many countries, including Sri Lanka, Pakistan, Bangladesh, Tibet and Afghanistan”.

Those urging the Supreme Court to order deportation of the Rohingyas include former RSS ideologue and Rashtriya Swabhiman Andolan leader KN Govindacharya.

Those fighting for the Rohingyas have been saying that their deportation would be a negation of the “idea of India”. They have also been telling the Narendra Modi Government that if New Delhi wants to strengthen its claim to a seat in the United Nations Security Council (UNSC), it has no other option but to fulfill what they call “international moral and political obligations” (www.thewire.in, Oct 10, 2017).

And, those opposing the presence of the Rohingyas, on the other hand, have been cautioning that “if the plea of Rohingyas is entertained, it may lead to another partition of the country” (The Hindu, Sep 9, 2017). The national mood is also against the Rohingyas.

As for the Government of India, it has filed an affidavit in the Supreme Court, which has given the nation to understand that it would want to deport the Rohingyas, as “some” of them have links with Pakistan and terror outfits, as also their presence in India constituted a grave threat to national security. It has also told the apex court that the Indian resources are meant only for the Indian nationals and that it would do well to leave the whole issue to the care of the executive.

It was in Delhi that I met a Kashmiri who told me Jammu & Kashmir was a state in India where Muslims lived in a majority. I came here in 2008

One doesn’t know what view the Supreme Court would finally take on this issue of great national import. One has to wait keeping one’s fingers crossed. However, the issue under scrutiny in this essay is not what the Supreme Court would say or not say on the Rohingya issue, notwithstanding the fact that their deportation is imperative for the security of the nation.

The issue under scrutiny is far more serious. In fact, there is a very serious question that needs a definite answer. The question is: Who brought Rohingyas from Delhi to Jammu and who sent them from Kolkata to the highly strategic Jammu?

Why this question? The answer lies in what two Rohingyas have said about the circumstances under which thousands of Rohingyas came to Jammu and settled. I am skipping the role of the Congress-led UPA Government (2004-2014) and Omar Abdullah-led NC-Congress coalition Government (2008-2014) and the Mufti Sayeed and Mehboooba Mufti-led PDP-BJP coalition Government (March 1, 2015 onwards) in the settlement of the Rohingyas at strategic locations in Jammu city and around it and Jammu’s border district of Samba. In this regard, I will only say that all these government’s played a dubious role to undermine national security.

I will straightaway quote verbatim what two Rohingyas said to put things in perspective.

Molvi Yunus, a 39-year-old, is one of the several thousand Rohingya Muslims living in Jammu since 2008.

In an interview, he said: “I crossed into Bangladesh from Burma (Myanmar) when persecution of Muslims became unbearable. From Calcutta I shifted with my family to Delhi where I begged for food to keep myself and my family alive. It was in Delhi that I met a Kashmiri who told me Jammu & Kashmir was a state in India where Muslims lived in majority. I came here in 2008”.

“We are in India because of some compulsions, and not out of choice. We know this is not our land. We will leave on our own once those compulsions are addressed”. This was stated to PTI by 35-year-old Mohammad Yusuf, the head of a camp for Rohingya refugees.

“We were boarded into a train and asked to disembark at the last station when the whole train got empty. We were not aware that it is Jammu. We came to know at the railway station that some Rohingyas were living here and met them. This is how we reached here,” he said, explaining why they landed in Jammu, several thousand miles from their homes (“Rohingyas say compulsions drove them to take shelter in J&K”, The Times of India, Aug 21, 2017).

Both Molvi Yunus and Mohammad Yusuf are very much residents of Jammu today. They are the right persons who could be asked about the Kashmiri who induced Molvi Yunus to come to Jammu and settle there and the person in Kolkata who herded the Rohingyas into a train and asked them to get down only at Jammu. They must be interrogated to know the whole truth and expose those who conspired against the nation.

Prime Minister Narendra Modi would do well to order a time-bound CBI probe to unmask the conspirators and bring them to justice. 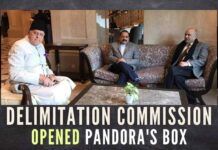