BBC at it again: Twisting facts to peddle an anti-India narrative

A Twitter handle @thehawkeyex (The Hawk Eye) who has over 42000 followers and is known for exposing the liberal agenda, has once again brought forth with facts, the fake propaganda of BBC against ‘The Kashmir Files’.

A video went viral on social media in which BBC can be seen interviewing some Kashmiri Pandits who are lashing out at the movie ‘The Kashmir Files’.

The video also shows the Kashmiri Pandits blaming the BJP for spreading communal hatred between the Hindu-Muslim community. It is also seen in the video that the people being interviewed by the BBC said that the film ‘The Kashmir Files’ is an agenda of the BJP to set a ground for 2024 general elections

Exposing the BBC propaganda, @thehawkeyex tweeted, “BBC published a report citing the views of ‘real’ Kashmiri Pandits over The Kasmire Files, which garnered 1mn hits, promoted by INC, CPM & entire left cabal. Let’s take a deep dive if they really represent ‘real’ voice of Kashmiri Pandits or are just used as a tool for BBC’s propaganda.”

Let’s take a deep dive if they really represent ‘real’ voice of KPs or are just used as tool for BBC’s propaganda.#TheHawkEyeThread
1/ pic.twitter.com/KZD6eAOG2r

The handle further tweeted, “BBC selected Jagti Township at Jammu, where “residents” are criticizing the film as a ‘political stunt gearing up for 2024’. Let this be clear that this location & these 3-4 peoples are not randomly picked. There is a specific agenda behind it.”

The hawk Eye has provided proof saying that in the video a ‘resident’ Shadilal Pandita (accompanied by a few) is seen. Pandita is currently leading a protest against the Central government for relief demand supported by local Congress.

The handle has also shared screenshots of Shadilal Pandita’s social media posts and public interviews which shows he is a staunch anti-BJP.

In the video, the man who delivered the ’tissue paper’ dialogue can be identified as Sunil Pandita, a local ‘India Against Corruption’ activist.

When Sunil Pandita shared his views on social media, he faced backlash from his fellow Kashmiri Hindus who replied to him with jarring comments.

Another person who delivered the ’tissue paper’ dialogue is Sunil Pandita, a local ‘India Against Corruption’ activist. He shared similar views about the film on social media & the rest is history. Check the harsh comments he received from FELLOW KPs from the vicinity.
4/ pic.twitter.com/97N2CZHlev

The Twitter handle concludes his serious of thread by saying that the “BBC exploited the selection as Kashmiri Pandits real view” with their anti-India agenda. They never dared to share Kashmiri Pandit’s story with the world but jumped to malign honest efforts. The Kashmir Files is not a film, it’s an agonized truth that waited for 3 decades to set free, he added.

After the Twitter handle exposed the propaganda video, the BBC has rushed to give clarification about the Pandits interviewed in their video. The screenshots have been shared by The Hawk Eyes tweeting, “After the propaganda video exposed & amplified by netizens, BBC issued CLARIFICATION: 1. These ppl are politically affiliated 2. They do NOT represent the entire Kashmiri Pandit community. BBC Hindi  BBC India update same on YouTube description as well.”

The cherry-picked of BBC video are facing unprecedented anger from fellow residents. Listen to this young lad.

THIS IS THE REAL VOICE OF KP.

It was always evident time and again that the BBC’s reportage on Kashmir is less than reliable. Even on general issues regarding India, BBC has displayed a remarkable tendency to twist facts to peddle an anti-India narrative.

Earlier, when the dastardly Pulwama attack occurred following India’s retaliatory airstrike, BBC was exposed for selectively airing only anti-India views in their Kashmir segment. Interestingly enough, it isn’t the first time that BBC has run biased or fake news on Kashmir. 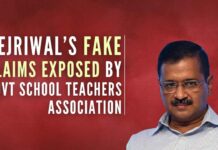 ‘The Kashmir Files’ review from the eyes of an Indian Muslim

Sree Iyer in conversation with the cast and producer of the...