The declassified Netaji files fail to clear the air about his mysterious disappearance within days of the end of the World War II, but one particular document brings huge embarrassment for the Congress, which claimed that forged materials were being circulated to show the party and its leaders in bad light…
Most of the declassified documents were already in public domains since they had been placed before three different commissions which probed Netaji’s disappearance after the plane crash in Taihaku in Taiwan on August 18, 1945. Netaji is believed to have died of injuries suffered in the plane crash a few days later.

Most of the correspondence and declassified notes made similar contradictory postulations — Japanese evidences and correspondence would tend to convey that Netaji died in the crash while documents sourced to British intelligence show that he was alive beyond August 1945. But there is not a single piece of evidence which could conclusively establish when and how Netaji died.

But that is beside the point. The documents have left the Congress red-faced, as they show that in 1945 Jawaharlal Nehru addressed Netaji as “your war criminal” in a letter to the then British Prime Minister Clement Attlee. Nehru also fumed at Stalin for allowing Netaji to enter their territory.

The PMO file No: 915/11/C/6/96 – Pol contains a note on the contents of the book – The Mysteries of Netaji’s Life and Death – by Pradip Bose. The note reveals Nehru’s controversial letter to the British Prime Minister Attlee on December 1945.
The note refers to a deposition by Nehru’s stenographer Shyam Lal Jain before Justice Khosla commission. Following is deposition made Jain before the commission:

“I solemnly affirm and state on oath that one evening (the date may be 26 or 27 Dec. 1945) I was told by Shri Jawaharlal Nehru on the telephone to come to the residence of Shri Asaf Ali with a typewriter as he had a lot of work to be typed by me, with which I complied. After getting some papers typed by me, Shri. Jawaharlal Nehru drew out a paper from the pocket of his Achkan and asked me to make four copies of it for him. The said paper was a hand written matter and somewhat difficult to read. Now what was written in that paper, I am trying to reproduce from memory”:

“Netaji Subhas Chandra Bose proceeding by aero plane from Saigon, arrived today August 23, 1945 at Dairen (Manchuria) at 1.30 afternoons. The said plane was a Japanese bomber plane. It was full of gold in the share of bars, ornaments and jewelry. Netaji carried two attaché cases, one in each hand. On alighting from the plane Netaji took tea with bananas.”

“When Netaji finished tea, he along with four others, of whom one was Japanese, named Gen Shedie, (and others have lapsed from memory) took their seats in a jeep standing nearby. The said jeep proceeded towards Russian territory. After three hours the said jeep returned and informed the pilot of the plane who flew back to Tokyo.”

After handing over the said paper to me for typing, Shri Jawaharlal Nehru went to Mr.Asaf Ali and remained busy in conversation with him for 10-15 minutes… I could not complete the work, because the name of the writer on that letter was not readable, and I kept waiting for Shri.Jawaharlal Nehru to come and tell the name. In the meantime I went through the letter several times and this is all that I could remember to the present day. Shri Jawharlal Nehru could not discern the name of the writer and asked me to pull out the papers and hand them over to him as they were.

[dropcap color=”#008040″ boxed=”yes” boxed_radius=”8px” class=”” id=””]I[/dropcap] solemnly affirm and state on oath that thereafter Shri Jawaharlal Nehru gave me four papers from his writing pad to make on the typewriter four copies of a letter, which he would dictate to me on typewriter with which I also complied. The contents of the letter as far as I could remember were as follows:

I understand from a reliable source that Subhas Chandra Bose, your war criminal, has been allowed to enter Russian territory by Stalin. This is clear treachery and betrayal of faith by the Russians. As Russia has been an ally of the British-Americans, it should not have been done. Please take note of it and do what you consider proper and fit.

[dropcap color=”#008040″ boxed=”yes” boxed_radius=”8px” class=”” id=””]J[/dropcap]ain’s deposition can be taken as authentic only if it matches with the documents with the British government and ascertained if Nehru indeed wrote any such letter to Attlee. Senior Congress leader Anand Sharma alleged that “forged documents” were planted and distributed to give a bad name to Congress and its leaders and the party will take steps to expose such elements. It also cautioned the media to be cautious in using such documents.

However, if Jain’s deposition is to be believed then Nehru did not think that Bose died in the plane crash since the letter was written four months after the so called plane disaster. 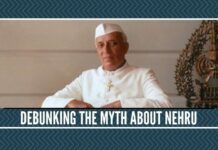