Farmers agitation in MP, spreading across the country

[dropcap color=”#008040″ boxed=”yes” boxed_radius=”8px” class=”” id=””]T[/dropcap]he farmers agitation—which began in Madhya Pradesh’s Mandsaur, spread to Neemuch, Ratlam, and Indore districts, and threatens to spread to other states—is a classic case of the harvest of bad karma. The reason is simple: the ruling party continues to have faith in the socialist farm policies that have been the bane of the agriculturist since Independence. The Bharatiya Janata Party, at the helm of affairs in MP and in New Delhi, cannot blame anybody else for the trail of death, destruction, and arson that the stir has brought in its wake.

All such steps may help staunch the agitation; the recent disturbances may not prove costly for Chouhan. The Congress, which has been accused of fueling the stir and inciting violence, may not gain much, party vice-president Rahul Gandhi’s theatrics notwithstanding

Half a dozen men have fallen to the bullets fired by the police in MP; many more have been injured; vehicles have been torched and property destroyed. The state administration, meanwhile, fumbles and bumbles through. Chief Minister Shivraj Singh Chouhan, who excels in sanctimoniousness and takes pride in his credentials as Kisan ka beta (son of the peasant), sought to bribe agitators into conformity by increasing the relief amount to the families of dead agitators to Rs 1 crore. Another damage control measure was a price stabilization fund of Rs 1,000 crore.

All such steps may help staunch the agitation; the recent disturbances may not prove costly for Chouhan. The Congress, which has been accused of fueling the stir and inciting violence, may not gain much, party vice-president Rahul Gandhi’s theatrics notwithstanding. It is beyond doubt, however, that the kind of policies the state and Central governments have been following and the type of measures they have announced will not address the real issue—that of farm distress.

The distress, by the way, is not restricted to MP; it exists all over the country, thanks to the statist policies imposed by the grand old party on agriculture. Interestingly, the basic flaws of the policies have been well known for quite some time.

[dropcap color=”#008040″ boxed=”yes” boxed_radius=”8px” class=”” id=””]T[/dropcap]he Niti Aayog, the government think-tank headed by Prime Minister Narendra Modi, is also cognizant of this reality. In an occasional paper that Niti Aayog prepared in December 2015, ‘Raising Agricultural Productivity and Making Farming Remunerative for Farmers,’ it made several suggestions in this regard.

There is the perennial issue of agricultural markets. The gap between the price that the farmer gets and what the consumer pays is very large

It called for liberalized land lease market which “offers a solution to several problems of Indian agriculture like consolidation of operational holdings, fallow lands, access to institutional credit, and productive use of land belonging to farmers unwilling engage in farming. A transparent land leasing law that allows the potential lessee or tenant or sharecropper to engage in written contracts with the landowner is a win-win reform.” A few months later, the think-tank also prepared “Model land leasing acts.” Not much, however, been on the subject since then. The political class has not shown any urgency in the matter related to opening up the land market.

Then there is the perennial issue of agricultural markets. The gap between the price that the farmer gets and what the consumer pays is very large. The Niti Aayog paper did acknowledge this fact, saying that there have been “limited reforms during the last three decades and the mandi system is characterized by inefficient physical operations, excessive crowding of intermediaries, long and fragmented market chains and low scale. This is depriving farmers of a fair share of the price paid by the final consumer. Consequently farmers are seeking MSP [minimum support price] for almost all crops and everywhere, which is not feasible.”

[dropcap color=”#008040″ boxed=”yes” boxed_radius=”8px” class=”” id=””]Q[/dropcap]uite apart from being a burden on the exchequer, MSPs increase government intervention in the farm sector and augment the importance of notoriously corrupt bodies like Food Corporation of India. The paper highlighted the reform of the Agricultural Produce Marketing Committees Acts in states so that the farmer could get higher prices. The Modi government has taken a few steps. It has set a target for itself to integrate 585 mandis into an electronic National Agriculture Market (e-NAM) by December 2017.

So, it would be unfair to say that the Modi regime has not done anything. The progress, however, has not been as good as one would have expected from an earnest government, the government that promised achhe din.

The BJP thought it could usher in achhe din by fooling, among others, farmers and perfecting the art of effective ‘messaging.’ The denouement is Mandsaur. 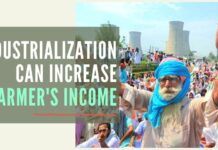 How industrialization can increase farmer’s income 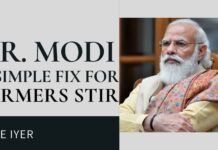 Mr. Modi, here is a simple way to solve the farmers’ stir 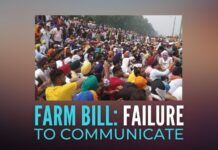 Farmers strike getting out of control. Modi Government must make peace with farmers