What was interesting is that Hurriyat leader Mirwaiz was in regular touch with one of the 26/11 Mumbai terror masterminds Lakhvi.

The intelligence sleuths have got this conclusive proof by hacking the phone of the top Pakistan Inter-Services Intelligence (ISI) officer Tanveer Ahmad who used to contact Gilani at the phone number +919419525055 for the past several years. The ISI officer Tanveer used to contact Mirwaiz mostly through email. The hackers of Indian agencies found that Tanveer used to pass messages to Mirwaiz through the email id: mirwaizumar@gmail.com

What was interesting is that Hurriyat leader Mirwaiz was in regular touch with one of the 26/11 Mumbai terror masterminds Lakhvi. The hacker sleuths from India found this vital information after hacking a phone which was regularly used by Lakhvi and they found that frequent to and fro calls were going to Mirwaiz’s number +919419003786.

The Indian hacker sleuths are believed to have hacked the phone address books of ISI officer Tanveer and Lakhvi to get this crucial information exposing the Hurriyat leaders. The screenshots of the hacked images of these phone books are produced at the end of this report.

…the Government has to act quickly and decisively to bring these two to book.

Tanveer was the head of the Pakistan team which landed in India in March 2016 in connection with Pathankot Airbase attack probe. India should have known this… Then why did the government even allow this individual into the country? Remember the brouhaha over the refusal of Gilani to meet with Yechury, Raja and Sharad Yadav? What were they thinking?

Evidence suggests that Gilani and Mirwaiz were in regular touch with Tanveer for the past five years and the Government has to act quickly and decisively to bring these two to book.

For the longest time, leaders of Jammu and Ladakh have been lamenting about the lavish treatment meted out to the residents of the Valley and step-motherly treatment to the rest of the state. Some bold moves are long overdue.

Lakhvi, one of 26/11 masterminds in contact with Mirwaiz using his cell phone 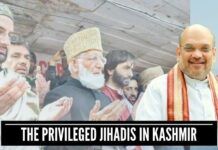 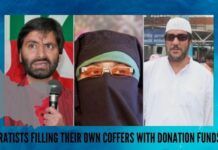 Separatists filling their own coffers with donation funds, sponsoring education of their own kids in foreign destinations: NIA 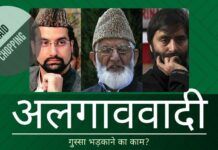