[dropcap color=”#008040″ boxed=”yes” boxed_radius=”8px” class=”” id=””]S[/dropcap]eed multinationals are so confident that they can ‘manage’ the Indian political class that, for over a decade now, they have got ‘committed scientists’ in Indian public institutions to work on Genetically Modified seeds in several food crops, including those for which India is a centre of origin and hence, per international norms, should not be touched so as not to invade and infect the germplasm and biodiversity of the species.

GM seeds are being prepared by so-called indigenous research, in secret, and for crop after crop

These MNCs do not scruple about the stage by stage approvals and permissions. After all, Bt Cotton was pushed into the country long before Government was persuaded to give it de jure approval, and the failure of the crop has not embarrassed the companies which persist with their underhand ways.

After nationwide activism checkmated Bt Brinjal from ruining the diversity of brinjal varieties in India, they quickly produced the GM Mustard, ostensibly from a laboratory in Delhi University. However, all pertinent patents vest abroad and all companies that benefit from the sale of pesticides or herbicides are western multinationals.

[dropcap color=”#008040″ boxed=”yes” boxed_radius=”8px” class=”” id=””]E[/dropcap]ven as GM Mustard is hanging fire, owing to an ongoing petition in the Supreme Court of India and the unflinching opposition of environmentalists and activists, including the think tank, Swadeshi Jagran Manch, a news leak informs us that some scientists have produced Transgenic Jowar (sorghum). GM news only emerges in bits and pieces, apparently to acclimatise citizens to the inevitability of multinationals controlling the national food chain, from seed to soil to crop and even sale – definitely the next frontier – far surpassing the ruthlessness of medieval and British era zamindars.

According to a news report, the Hyderabad-based Indian Institute of Millets Research (IIMR) has allegedly been working on GM Jowar and is all set to flood the country with transgenic millets with Bt genes with allegedly better grain size and resistance to pests. There is a real danger that they may have conducted secret field trials without the mandatory safety guidelines.

The news has come as a shock to environmentalists, farmers bodies, and health rights activists who immediately demanded that the Central Government stop the release of GM Jowar for human or animal consumption.

Clearly, a very devious and dangerous game is afoot. GM seeds are being prepared by so-called indigenous research, in secret, and for crop after crop, and the news released in convenient driblets. Clearly, someone or rather a set of persons has given the companies the assurance that whatever the delays, these seeds would eventually be approved and the way paved for endless profits and full dominance of Indian agriculture.

[dropcap color=”#008040″ boxed=”yes” boxed_radius=”8px” class=”” id=””]A[/dropcap]s this confidence has survived the change of government in 2014, it stands to reason that only “dominant” (with the ability and connections to fix things) bureaucrats and scientists, even if retired, could have given this assurance to the western multinationals, and convinced them to stay put in India and invest money in Indian scientists and their “research”, covertly of course. This makes one wonder what the balance sheets of these companies look like; how do they disguise their actual expenditures?

In 2006, an agriculture university in West Bengal reported that GM Bhindi (okra) had been planted illegally

GM Jowar cuts deep into society. A hardy crop that grows in dry lands, Jowar is respected as a highly nutritious food and is credited with controlling high blood sugar levels. It is consumed by all population groups across the country; contamination of Jowar germplasm could have catastrophic health effects.

IIMR’s official site claims to have created stem borer-resistant transgenic sorghum plants through Bt technology, and to have developed “genetic transformation technology to suit the needs of Indian sorghum genotypes”.

Southern Action on Genetic Engineering (SAGE), a coalition of farmers, scientists, environmental activists and civil society groups from South India, has urged the Centre to reject GM sorghum. SAGE convener P.V. Satheesh has written to the new Union Minister of Environment and Forests, Dr Harshvardhan, about the threat posed to a crop that has given complete food and nutritional security to people in dry lands for centuries, besides rich fodder for cattle. In Mexico, the accidental introduction of GM maize killed the maize biodiversity of the country, and this should be a warning to India.

[dropcap color=”#008040″ boxed=”yes” boxed_radius=”8px” class=”” id=””]Y[/dropcap]et this development is not new. In November 2014, India’s prestigious Basmati rice was found adulterated with cheap GM rice by the UK-based GM certification firm, Cert ID. Fortunately, there has been no GM Basmati so far. But the incident put Basmati in danger of being banned in the European Union and other GM-sensitive markets. The contamination happened despite India banning GM rice trials in three states of the Basmati rice export zone in 2007 after the EU and other countries rejected imports of rice contaminated with GM strains.

Instances keep coming to light of scientists aligned with GM seed companies facilitating field trials of several food crops illegally. In 2002, Tamil Nadu women farmers and the Coalition for a GM-Free India exposed a university in Coimbatore for experimenting with BT Corn. Greenpeace activists raided a village near Hyderabad and found a company engaging in field trials of GM Rice and forcing farmers to buy the herbicide Glufosinate that is banned in Europe for causing birth defects.

In 2006, an agriculture university in West Bengal reported that GM Bhindi (okra) had been planted illegally. The same year, poor farmers in Jhansi, Uttar Pradesh, were asked to plant “special seeds” of many vegetables, including green chilly.

In March 2011, Bihar Chief Minister Nitish Kumar accused a multinational seed corporation, the Indian Council of Agricultural Research (ICAR) and the Union Environment Ministry’s Genetic Engineering Appraisal Committee (GEAC) of conniving to conduct field trials of GM Maize in Bihar without clearance from the Ministry and without informing the State Government. He said ICAR’s experimental farms failed to keep the ‘isolation distance’ required to prevent the spread of contamination; Union Minister Jairam Ramesh directed the GEAC to immediately stop the trials.

[dropcap color=”#008040″ boxed=”yes” boxed_radius=”8px” class=”” id=””]G[/dropcap]MO contamination is irreversible. The seeds of GM plants are engineered to be sterile and wind pollination can contaminate and wipe out other plant species. The small size of Indian farms makes them especially vulnerable to genetic contamination. Yet the multinational seed companies are setting their own agenda, thanks to powerful, invisible backers.

Prime Minister Narendra Modi must urgently investigate the extent of illegal experimentation in GM foods; the institutions, firms and officials involved; and the extent of inroads already made illegally into the food chain.

A special enquiry is needed in Bt Cotton areas, where cattle fed with cotton seed cake after oil extraction are reported to have suffered abortions, still births, and sharply reduced milk yields. It is understood that the extracted oil was blended with other edible oils and entered the human food chain illicitly. This poses a grave danger to public health and the truth needs to be established without delay. 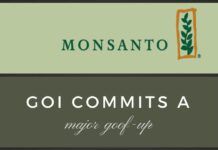 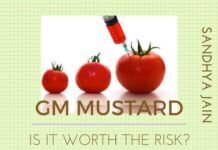