As Justice Khanna had feared, he was superseded in January 1977. What did he do? Call a press conference? No, he resigned quietly

Drastic times, they say, call for drastic measures. The situation that Justices J. Chelameswar, Ranjan Gogoi, Madan B. Lokur, and Kurien Joseph found so intolerable that they organized a press conference, however, doesn’t seem to be as drastic as to merit this unprecedented step. Worse, it could become an unpleasant precedent.

All the four judges are widely respected, but they have erred by talking to the media to air their grievances against Chief Justice Dipak Misra. For, at the end of the day, the issues pertained to administrative matters rather than some diabolical illiberal plot. “The four of us are convinced that unless this institution is preserved and it maintains its equanimity, democracy will not survive in this country,” Justice Chelameswar said at the presser on Friday.

That democracy faces a variety of threats is not disputed; many people, including me, have written extensively on the subject. It is also true that unless the judiciary “is preserved and it maintains its equanimity, democracy will not survive in this country.” Nobody would have disputed with Justice Chelameswar had he said this in a judgment, but to say that in a press conference was not very appropriate.

The four judges wrote a letter expressing their displeasure over the CJI’s allocation of important cases to junior SC judges. But neither in their letter nor in their press conference did they mention anything that could be vaguely related to the murder of democracy in India. In reply to a query, one of the judges did say that their revolt also pertains to the Loya case which has political ramifications. On the whole, however, the entire matter seemed about and is about administrative issues related to the apex court. There was nothing that they said or implied that could be perceived as an assault on individual liberty, undermining of democratic institutions, compromise of national security, etc.

So, why did they hold the press conference? No apocalypse was imminent; the world was not coming to an end; tyranny was not looming large over the country. Much worse things have happened in India. During the Emergency (1975-77), the government under Indira Gandhi had the impertinence and insolence to claim in the Supreme Court that there would be no justice even if a police officer killed a citizen out of personal enmity.

In the case of the Additional District Magistrate of Jabalpur v. Shiv Kant Shukla, the five-judge Bench of the Supreme Court opined in April 1976 that the government had the power to suspend all Fundamental Rights, including the Right to Life, during a state of emergency. In his autobiography, Justice H.R. Khanna, who wrote a historical note of dissent upholding democracy, mentioned the arguments. He wanted to know if, in view of Attorney-General Niren De’s submissions, there would be any remedy if a police officer because of personal enmity killed a man? “The answer of Mr. De was unequivocal: ‘Consistently with my argument,’ he said, ‘there would be no judicial remedy in such a case as long as the Emergency lasts’.”

April 28, 1976, was perhaps the darkest day in the history of the Supreme Court and of Indian democracy: four judges of the top court accepted the abrogation of the right to life. The outrage was infinitely more than the mismanagement of roster by any CJI. And what did the most courageous and upright judge, Justice Khanna, do? Call a press conference? No, he wrote a note of dissent that cost him the office of chief justice; and he knew the cost. He told his sister, “I have prepared my judgment, which is going to cost me the Chief Justice-ship of India.” He chose principle over expedience and solid action over theatrics.

The New York Times wrote an eloquent editorial on April 30, 1976: “If India ever finds its way back to the freedom and democracy that were proud hallmarks of its first eighteen years as an independent nation, someone will surely erect a monument to Justice H.R. Khanna of the Supreme Court. It was Justice Khanna who spoke out fearlessly and eloquently for freedom this week in dissenting from the Court’s decision upholding the right of Prime Minister Indira Gandhi’s Government to imprison political opponents at will and without court hearings… The submission of an independent judiciary to absolutist government is virtually the last step in the destruction of a democratic society, and the Indian Supreme Court’s decision appears close to utter surrender.”

As Justice Khanna had feared, he was superseded in January 1977. What did he do? Call a press conference? No, he resigned quietly. He lost the top office but earned immortality and gratitude of the entire nation. The same is unlikely to be said about the four judges. 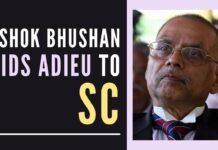 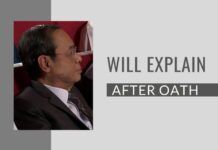 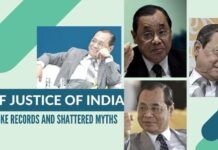 Prashant Kishor & the quest for opposition

Karnataka Budget must focus on Urbanization and Job Creation