Will apologists of the BSP respond to attacks on the Mahatma by their icon with the honesty that Babasaheb Ambedkar demanded of the Father of the Nation?

Bahujan Samaj Party spokespersons have been among those who vociferously condemned Sadhvi Pragya’s comment that Mahatma Gandhi’s assassin Nathuram Godse was, is and will always be a patriot.  There is nothing wrong in the sharp reaction, given that her remark was in extremely bad taste and had hurt the sentiments of millions of Indians who hold the Father of the Nation in high esteem, regardless of whether they subscribe to his views or not. But will the BSP be equally condemnatory of their icon BR Ambedkar, who on repeated occasions, heaped scorn on Gandhiji, refusing from one point in time to even address him as Mahatma and instead of addressing him as “Mr Gandhi”? Here is a sample of Ambedkar’s views:

Addressing an audience on the eve of his departure to attend the Second Round Table Conference, he accused Mahatma Gandhi of plotting to keep the Depressed Classes (the old term for Scheduled Castes) in bondage. “But it was a great shock to the world that Gandhi himself should have sponsored violent opposition to the breaking of your shackles.” Thus, Ambedkar not only inferred that the Mahatma wanted to keep the Depressed Classes under subjugation but also deployed violence as a tool to oppose.

The list of allegations is long, and not all of it can be reproduced here. But there is one that needs a mention because it accuses the Father of the Nation of no less than duplicity

Thus, the Mahatma was a hypocrite in addition to being a sponsor of violence to sustain the bondage of the Depressed Classes and prone to making hollow statements. Then Ambedkar goes a step further: “Insofar as he does think, to me it really appears to be prostituting his intelligence to find reasons to support this archaic social structure of the Hindus.” In a similar vein, while responding to the Mahatma’s option on the Annihilation of Caste, Babasaheb claimed that Gandhiji was prevaricating on the issue of caste because he was worried about losing his political stature. “He has almost in everything the simplicity of the child with the child’s capacity for self-deception… The reason why the Mahatma is always supporting case and Varna is that he is afraid that if he opposed them he will lose his place in politics.”

Ambedkar had poured scorn on what had become popular as ‘Gandhism’, which represented a way of life and politics the Mahatma preached. In his words What the Congress and Gandhi have done to the Untouchables, he writes: “The ideas which go to make up Gandhism are just primitive”; “The economics of Gandhism is hopelessly fallacious”; “In Gandhism the common man has no hope. It treats man as an animal and no more”.  Thereafter he proceeds to question the Mahatma’s very democratic credentials. “Gandhism may well be suited to a society which does not accept democracy as its ideal.” According to Ambedkar, Gandhiji promoted “back to nakedness, back to squalor, back to poverty, and back to ignorance for the vast mass of the people”.

Babasaheb, on repeated occasions, questioned not just the Mahatma’s credentials but also his sincerity in working for the uplift of the ‘untouchables’. According to the recorded Proceedings of the Federal Structure Committee and Minorities Committee, which conducted the main work of the second session of the Round Table Conference in England, Ambedkar castigated the Gandhiji for projecting himself (and the Congress) as a saviour of the Depressed Classes. “The Mahatma has been claiming that the Congress stands for the Depressed Classes… To that claim, I can only say that it is one of the many false claims which irresponsible people keep on making…” And so, the Mahatma became ‘irresponsible’ too, besides other things.

The list of allegations is long, and not all of it can be reproduced here. But there is one that needs a mention because it accuses the Father of the Nation of no less than duplicity. In the backdrop of the Round Table Conference, he wrote to a national daily, “We are, however, reliably informed that in carrying his negotiations with our Muslim friends, Mr Gandhi demanded that as one of the conditions for his accepting their fourteen points, they should oppose the claims of the Depressed Classes, and smaller minorities. To say in public, ‘I will agree if all others agree’, and then set out to work in private to prevent others from so agreeing by buying off those who are willing to agree, is, in our opinion, a piece of conduct unbecoming a Mahatma and to be only expected from a inveterate opponent of the Depressed Classes. Mr Gandhi is not only not playing the part of a friend of the Depressed Classes, but he is not even playing the part of an honest foe.”

Will apologists of the BSP respond to these attacks on the Mahatma by their icon with the honesty that Babasaheb Ambedkar demanded of the Father of the Nation? Or is it that political compulsions Ambedkar had accused the Mahatma of, coming in the way? 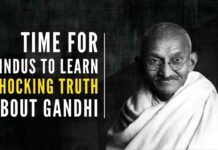