“We are aware of what is happening in the State. But, I am sorry, we are helpless,” these are the words of a widely respected government official in Kerala when a group of Opposition party leaders called on the official to express their anguish and apprehension over the reign of terror unleashed by the CPI-M cadre all over Kerala.

[dropcap color=”#008040″ boxed=”yes” boxed_radius=”8px” class=”” id=””]T[/dropcap]eam PGurus had in the past highlighted the murders of RSS and BJP workers committed by the CPI(M) cadre in Kerala since the party-led LDF assumed power in the State in May 2016. Though many peace meets were convened by various departments and NGOs in Kannur district, the nerve centre of the terrorism perpetrated by the CPI(M), the comrades stayed away from all such meetings.

What has infuriated the CPI-M leadership is the number of party cadre leaving the party and joining the RSS/ BJP.

“This is an indication that the CPI-M has planned to murder more Sangh Parivar leaders in Kannur district. They are boycotting such meetings as they are busy preparing the next series of murders,” said Prasanth Arya, a CPI-M observer based at Thiruvananthapuram, the capital city. The CPI-M has already murdered six Sangh Parivar leaders since it came to power in the May 2016 assembly election.

What has infuriated the CPI-M leadership is the number of party cadre leaving the party and joining the RSS/ BJP.

“The law and order situation in the State of Kerala is pathetic. This could be resolved if and only the ruling party takes the initiative,” said C P Nair, former Chief Secretary, who himself was the home secretary of the State for a long time. He said there is a fear psychosis among the officials as they have not been given any elbow room to resolve the burning issues.

[dropcap color=”#008040″ boxed=”yes” boxed_radius=”8px” class=”” id=””]T[/dropcap]he CPI-M is in a tight corner in spite of its big win the assembly election. Hardly four months into governance, the Industries Minister E P Jayarajan was forced to resign as a fall out of charges of nepotism and corruption. The minister had no qualms in appointing a close relation of his as the managing director of industries department though the latter had no specific qualifications. Paul Antony, the additional chief secretary , who was also holding the post of industries, was shunted out by the CPI-M-led government for questioning the illegal appointment of Jayarajan’s relation to the top job.

P K Sreemathi became a “role model” for all mothers-in-law in the country, by appointing her daughter-in-law as her cook and later elevating her to the gazetted rank so that she could draw lifelong pension of a gazetted officer.

Jayarajan had appointed half a dozen of his relations to senior positions in the government and public sector undertakings though they lacked the necessary qualifications. P K Sreemathi, MP, who is the former minister in the previous V S Achuthanandan ministry (2006 to 2011) became a “role model” for all mothers-in-law in the country, by appointing her daughter-in-law as her cook and later elevating her to the gazetted rank so that she could draw lifelong pension of a gazetted officer.

What shook the Pinarayi Vijayan government lately is the underworld ties of some of the senior leaders of the CPI-M and their underhand dealings and Kangaroo Courts. P Rajeeve, the party’s Ernakulam district secretary who is a former Rajya Sabha member has been thoroughly exposed by the Kerala media for his questionable deals with some of the “quotation gangs” operating in the district. One of the “quotation leaders”, Sakkeer (Zakir) Hussain, is a senior level leader of the CPI-M in the district. Rajeeve, who was described as a role model for all young MPs by none other than Arun Jaitley, Venkaiah Naidu and Ghulam Nabi Azad, have been thoroughly exposed for his financial dealings and Kangaroo Courts. It is said that Sakeer Hussain kidnapped a Kochi based entrepreneur and took away her Jaguar car worth crores at the instance of Rajeeve. Hussain has approached the Kerala High Court with a plea to grant him an anticipatory bail.

[dropcap color=”#008040″ boxed=”yes” boxed_radius=”8px” class=”” id=””]T[/dropcap]he internal fighting in the CPI-M came out in the open when Mammootty, a Kochi based businessman with a dubious past, spilled the beans against Hussain whom he doubted as the one who was blocking the growth of his businesses which include real estate, education, truck parking stations and many illegal activities.

…last four months of the CPI-M rule has proved that nothing is working right in Kerala.

The image of the CPI-M, if any, took a severe drubbing on Thursday when Bhagyalakshmi, a dubbing artist with leanings to the party, came out in the open exposing Thrissur district panchayat council member Jayanthan, a hardcore CPI-M leader and his friends for raping a poor woman and threatening her with dire consequences if she dared to make complaints to the police.

The woman along with her husband met Bhagyalakshmi who organised a press meet where the victim herself explained the shocking sufferings she had to undergo in the hands of Jayanthan and his friends. She said the police inspector with whom she tried to file the complaint ridiculed her when she told him that she was sexually molested by Jayanthan and four of his friends. “Who gave you maximum pleasure?” the police inspector is reported to have asked her when she went to the police station to prefer a complaint. The victim narrated how she was forced by the inspector to withdraw the complaint against Jayanthan and his comrades.

The CPI-M’s slogan before the May 2016 assembly election was “Let the CPI-M win the election. We will make everything work”. But last four months of the CPI-M rule has proved that nothing is working right in Kerala. 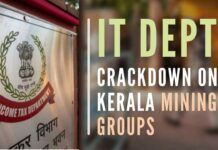 Move to settle Kashmiri Muslims in Jammu is fraught with dangerous...