Plotters chat of Bihar ‘Ghazwa-e-Hind’ surfaced; Pak number and mention of ‘Jihad in 2023’

Two days after the Patna police and the National Investigation Agency (NIA) busted an anti-national group in the Phulwari Sharif area of Patna, the investigation revealed that it has terror links in Pakistan and Bangladesh.

The joint team has arrested seven alleged members of the extremist group — Popular Front Of India (PFI) — till now and one of them named Marguv Ahmed Danish alias Tahir was in contact with youths of Pakistan and Bangladesh.

The joint team of Patna ATS and the NIA conducted raids at Sabji Bagh locality on Friday and recovered objectionable material from the offices of PFI. The Patna police registered an FIR against 26 persons in connection with this case and 19 of them are currently absconding.

Patna Senior Superintendent of Police (SSP), Manavjeet Singh Dhillon said on Friday, “Marguv had formed a Whatsapp group named ‘Ghazwa-e-Hind‘ wherein a number of youths of Pakistan and Bangladesh were associated with.”

“Marguv, a native of Bihar’s Gaya district had completed the course of Hafiz Bastania and Fokania. He is said to be a radicalized person who was in contact with Pakistani youths through Whatsapp, Facebook, and e-mail since 2016. During the investigation, Marguv was involved in uploading and passing provocative audio and video content on social networking platforms and his Whatsapp group ‘Ghazwa-E-Hind’. He was also associated with a Pakistani group ‘Tahriq-e-Labbaik‘. A Pakistani national named Faizan is also in regular contact with him,” the SSP added. 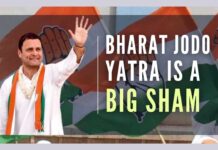 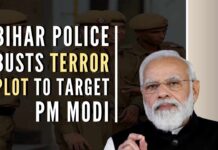