[dropcap color=”#008040″ boxed=”yes” boxed_radius=”8px” class=”” id=””]I[/dropcap]ndian Prime Ministers(PM) were making extempore speeches till 1986 from the ramparts of Red Fort on Independence Day – August 15. Prime Ministers from Jawaharlal Nehru to Rajiv Gandhi used papers having key points to be made in the speech. They used to look at the paper to ensure they are covering the salient points. Prime Ministers would take at least two to three days to prepare for making their speech at Red Fort, say veteran civil servants who worked in the Prime Minister’s Office. They say, in those days speech points will be ready by August 12 and the PM will be fully immersed in it, preparing his speech.

From 1987 to 2013, all Prime Ministers from Rajiv Gandhi to Manmohan Singh shifted to a full written speech. There is a funny reason behind this. This 26 year old custom was changed by Prime Minister Narendra Modi in his maiden Independence speech on 2014.

Reason for switching to written speech

[dropcap color=”#008040″ boxed=”yes” boxed_radius=”8px” class=”” id=””]I[/dropcap]n his 1986 extempore speech, Rajiv Gandhi committed a gaffe. During his speech he mentioned Independence Day as Republic Day. Veteran officials say, Rajiv repeated this mistake two or three times. Subsequently Doordarshan and Akashvani were forced to delete this blunder from their archives. The print media had a field day publishing cartoons and having fun at the Prime Minister’s expense.

From the following year, Rajiv Gandhi started delivering a written speech. Rajiv was not an orator. But orators like P V Narasimha Rao and Atal Bihari Vajpayee were also forced to follow this custom imposed by the bureaucrats. Veteran bureaucrats say that by early 2000, there was a talk to fix Teleprompters for Prime Ministers speech and discussions were in progress with Doordarshan for installing it. But no one decided to take a risk as it was an open area.

Vajpayee actually wished to make an extempore speech. But bureaucracy prevailed on him. Bureaucrats argued that Independence Day speech is an occasion for the PM to make policy decisions of the government and there should be no mistake and hence it is better to continue the existing arrangement, to which Vajpayee agreed.

The 26 year old custom is changed by Prime Minister Narendra Modi. He too was advised by the bureaucracy, but ignored it and went ahead and gave an extempore speech, keeping the salient points on a paper. 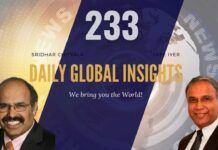