India abrogated Article 370 in August 2019 followed by Citizenship Amendment Act in December 2019, this is where it all started, it is said that from November 2019, the Islamic activists have been spreading counterfeit messages across the world. When Article 370 was abrogated they spread the message that it is unfair on part of Kashmiris that special rights have been taken away and so on. Then, when CAA was passed, the rumours were that it’s against human rights and it is against the Muslim community in particular, whereas for the matter of fact, neither Abrogation of 370 nor CAA has anything to do with such rumours.

Now, what exactly happened and where?

Basically, the Islamist activists around the world are trying to spread the wrong message that India is suppressing the minority, however, it is the other way around, in reality. Indian govt has always given more benefits to minority, but, these messages send wrong signals.

To defend such false statements and messages, Coalition of Hindus of North America (CoHNa) is one of the groups which has come forward to clear the air.

Dealing with anti-CAA activists in a subtle but effective manner

Here is a story of a group of activists who are consciously working towards the benefit of India, showing the actual side of the story to people in the US.

CoHNA – Coalition of Hindus of North America – an organization dedicated to improving the understanding of Hinduism among North Americans has taken up this cause. They provide verified information to schools with facts on CAA, Abrogation of article 370, ground reality in Kashmir and bring a stop to anti-India events at schools.

They argue that most of the times the teachers don’t have in-depth knowledge on these topics and mainly rely on the information provided the media. They have been quite successful in their endeavour.  One of the things, which is puzzling is, how such political agendas have made their way into campuses/school premises, even if it is through the medium of organizing events.

In one of the instances, the Chicago Tribune had published an article on a 17 -year old student activist Aminah Ahmed, who had been at the forefront in rallying against CAA [1]. CoHNA activists consulted the Additional Solicitor General and many other sources and collected all the information and shared it with Chicago Tribune. The Chicago Tribune then retracted all the elements from the article with regards to CAA, although they have retained the activist story of Aminah Ahmed.

Another very divisive instance took place in Maryland, where an India awareness day was organized around August 15th. In this event, children were asked to dress either in Saffron or Green. The western audiences are not aware of the significances of these colours, however, anti-CAA supporters were supposed to wear Green and the children wearing Saffron were to be side-lined. But, some of the parents were strong enough to take up this issue and got this up with CoHNA members – Swapna Raina and Sudha Jagannathan. Members of CoHNA and Parents together pulled down the entire program after talking to the Principal and teachers.

So, all in all, we can say that more and more countries should have such proactive groups like CoHNA who can show people the realistic picture of India, especially in sensitive issues like CAA, Abrogation of Article 370 or the Farm laws. CoHNA is taking care of the USA for now, they should think of connecting with other countries to create awareness. 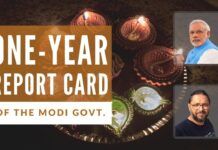 CBI asks US help to recover deleted text; how long will...