Opening the newspaper this morning, I chanced upon a news headline that caught my eye. It said: Bharathiar University Vice-Chancellor Dr A Ganapathi booked in faculty job racket. It carried a news about the Vice-Chancellor of Bharathiar University, Coimbatore, Tamilnadu, getting arrested being caught red-handed while taking a bribe from an Assistant Professor for regularising his post. When caught, he tried to flush the bribe money in the washroom.

He indeed is a Kulapati, who is highly educated (Vipra – vidyayā yāti vipratvam) and a person who is known for truthfulness/integrity* (ṛṣi) and who teaches ten thousand Munis (initiates) while providing them with food and other amenities

The part regarding him trying to flush it down the toilet is there in the print edition of the paper (The New Indian Express). The online link does not, however, carry this information. That itself is puzzling as to why there is so much mismatch between the online version and print version. The print version of the same news item is below. 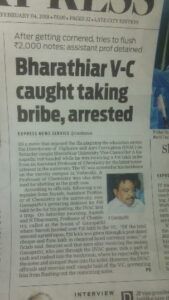 However, this is not the main crux of my post. This news item set me thinking about the issue of education, heads of institutions and ethics and as a samskritist, what our tradition has to say on the subject.

Compare the above news item with the following –
As a Saṃskṛtist, the following is my take on this. The head of a very big educational set up is called Kulapati in Samskṛta. The term is defined as –

munīnāṃ – of the initiates, daśasāhasraṃ – ten thousand, yaḥ – the one who, annadānādipoṣaṇāt – by nourishment through grant of food and other amenities, adhyāpayati – teaches, viprarṣiḥ – learned and truthful, sa – he, vai – indeed, kulapatiḥ – head of the community, smṛtaḥ – is remembered.

He indeed is a Kulapati, who is highly educated (Vipra – vidyayā yāti vipratvam) and a person who is known for truthfulness/integrity* (ṛṣi) and who teaches ten thousand Munis (initiates) while providing them with food and other amenities.

(* I have given the meaning to the term ṛṣi as a person with great integrity based on a Rāmāyaṇa reference. It says – …uktānṛtamṛṣim yathā (2.16.6) – Just before his coronation as the prince, Rāma was summoned by Daśaratha at the behest of Kaikeyī. When Rāma entered Daśaratha’s room, he saw Daśaratha being seated – with a great sense of guilt – like a ṛṣi who had lied (ukta-anṛta). This indicates that ṛṣi is not only a mantradraṣṭā (a seer of the mantras) but also a satyaniṣṭha (one who is steadfast in truthfulness) Now contrast the Vedic perspective with that of the current scenario, where a VC is getting jailed for corruption. The VC is the equivalent of the Kulapati

So Kulapati is a Vipra. Kulapati is a ṛṣi. Most importantly, Kulapati is the one who PROVIDES food and other amenities and not the one who receives anything “above or below the table” if one were to go by the standards of discourse that prevail today.
Furthermore, in the Taittirīya Upaniṣad (7.4) we find an interesting passage in this connection. A teacher who intends to impart education to the students performs a ritual called āvahantī. The following are the mantras related it. The meaning of the mantra will make the purpose of the ritual very clear.

(Meaning according to the 14th-century commentary of Sāyaṇācārya)
O! parameśvara bestow me wealth from all sides. The wealth that includes – clothing, cows, food and water to drink, goat, horse, woolly animals like sheep and so on. Let such wealth come to me in plenty, let it grow and stay with me and my students for a long time to come. For the attainment of such wealth, I make this offering of ghee into the sacred fire. As there is plenty of clothing, food and water to drink, now, let students come to me from all sides!

This ancient Upaniṣadic reference clears all doubts. The onus is on the teacher to prepare himself with resources and not the students before he embarks on imparting education to the students. This is the Vedic perspective.

Now contrast the Vedic perspective with that of the current scenario, where a VC is getting jailed for corruption. The VC is the equivalent of the Kulapati! And what is he doing? He is filling up his own coffers with the money of those who are looking up to him as their Kulapati! What a shame! This is where we end up when we are disconnected from our noble moorings. Many more skeletons will tumble from the cupboard called the university set-up which is already jaded and moth-eaten in present-day India. Mainstream educational set up will crumble because the edifice is not built on dharmic foundations.

Saṃskṛta and the Vedic lore have not only such fine references that remind us of the ideals that help in the establishment of a noble polity but also a living tradition of teachers (albeit struggling for survival) who are Kulapatis in the real sense (on a smaller scale).

To conclude, as a Saṃskṛtist educated in a Gurukula set up, I am of the firm view that Gurukula with Kulapatis is the way forward if our education has to create a decent society and not universities with Vice(pun intended)-chancellors. 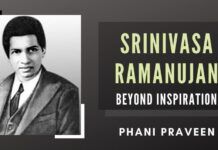