[dropcap color=”#008040″ boxed=”yes” boxed_radius=”8px” class=”” id=””]W[/dropcap]e had, through a previous article, suggested actively promoting e-Wallets as tools to tackle cash shortage post-demonetisation. Subsequently, the Government has announced that open tools such as UPI, USSD and AEPS are also available, which are even better, more comprehensive in reach and less costly. These tools make it possible for people to transfer unlimited amounts from their bank accounts, since physical currency is not involved, reducing the need for physical currency.

To start with, the Government hasn’t done enough to publicise these tools; a few mentions here and there on these tools through a couple of Pressers are grossly inadequate.

It is surprising that despite the availability of such an amazing suite of digital payment solutions ready at hand, the Government hasn’t done enough to exploit them to solve the on-going cash shortage crisis.

[dropcap color=”#008040″ boxed=”yes” boxed_radius=”8px” class=”” id=””]T[/dropcap]he vendors we watch on TV shows who have started accepting digital payment (mainly Paytm), are only the very early birds among the early adopters; they don’t even constitute 1% of the potential market.

If the Government is serious about getting tens of crores of people to start using these tools immediately to solve the cash shortage crisis, it should handhold people in using these starting from now, as the learning curve for the aam aadmi, esp for those in rural areas, the semi-literates & illiterates, the technology-challenged and the senior citizens, is fairly steep, despite the tools being easy to use. Mohammed will not go to the mountain; the mountain should come to Mohammed.

Let’s see briefly what these tools (other than e-Wallets) are:

A large percentage of our population have low cost GSM mobile phones. USSD (Unstructured Supplementary Service) will help them transfer money from their bank account to anyone else (vendors, friends, relatives etc) who may have bank account, in their own or any other bank, by simply dialling *99# and providing the recipient’s mobile number and the amount, validated by PIN number. The job is done and a message confirming the same is received.

Unified Payment Interface (UPI) helps people transfer money from their bank account to anyone else (vendors, friends, relatives etc) who may have bank account in their own or any other bank, by simply downloading an app on their own smart phone with internet facility, and providing the bank name, account number, IFSC code and the amount, validated by PIN number. The job is done and a message confirming the same is received. For subsequent payments to the same recipient, details can be stored and just recalled.

Aadhaar Enabled Payment System (AEPS) helps people transfer money through a Micro ATM (which is like a Card Processor) or Banking Correspondent, from their bank account to the recipient’s account (vendors, friends, relatives etc), in their own or any other bank, by simply providing one’s own Aadhaaar number, the bank name and the amount, validated by finger print (verified from Aadhaar database). In addition, cash withdrawal and deposit are also possible here.

All these are extremely simple processes which typically take less than half a minute per transaction. They come with proof of payment (not available with cash payment which only encourages generation of black money) and will get crores of people used to cashless transactions. Yet, since most people are not used to digital payments, there’s some learning involved. They are quite safe, though the typical precautions like keeping PIN number secret are necessary. Illiterates may need the help of others to use USSD and UPI, but not for AEPS, because AEPS involves the vendor/ Banking Correspondent, anyway.

Of course, options like bank transfer, withdrawal or payment using debit/ credit card in banks and ATMs, across the counter withdrawal in banks, usage of e-Wallets etc. are also available.

Crores of people wait in queues outside banks, ATMs and Post Offices, wasting their time. The Govt can give tokens to these people and use their waiting time to explain about these tools in great detail, either inside the bank premises or in any available public space; they can even give printed handouts, giving urls of sites where these can be demonstrated in the form of PPTs, animations, etc. Still better, they can organise demos where the public can even be allowed to try by themselves. Even Rural Cooperative Banks can be involved, as this doesn’t involve demonetization, not even re-monetization. The services of NGOs and volunteers can also be used.

Additionally, all DD channels can keep playing Powerpoint presentations (PPTs) and demos on the use of these tools so that people can view them at homes at their convenience, any number of times, and convince themselves about the ease of their use. The DD channels can also invite viewer questions and answer them through experts. A standard set of Frequently Asked Questions (FAQ)s can be played repetitively.

Tech-savvy people can teach the not-so-tech-savvy around us so that they can continue with their business and lives without being adversely impacted by the cash crunch. Almost every family is likely to have kids/ youth who can understand these tools better, and they can be trained first, and they can train others at home, in turn; this will speed up the process of propagating use of these tools.

Apart from all these, the Government can incentivise the early adopters, esp small trade and rural poor consumers, in some form. Even a lottery with attractive prizes will incentivise many to take the initiative and go digital for making and accepting payments.

[dropcap color=”#008040″ boxed=”yes” boxed_radius=”8px” class=”” id=””]L[/dropcap]ast but not the least, these payment systems can be named to be more catchy and people-friendly. For example, AEPS can be called Aadhaar Lena Dena, UPI can be called Smart Lena Dena and USSD can be called Mobile Lena Dena.

Once all this is done, it will not only mitigate the immediate sufferings of people who seek cash substantially, but also get them used to digital way of transacting money for the long run. Once they taste this, a lot of people will realise that it makes better sense to keep their cash in their bank accounts, earn interest, and make most of their payments through these means, which will lead to reduced cash requirement almost immediately, and lead us to a cashless society in the long run. Though all this will work better in urban areas, we may be surprised to see how well it works even in rural areas.

This will reduce the crowds at banks and ATMs. More of physical cash can be routed to rural areas where fewer people may adopt this, to start with. Every problem is an opportunity in disguise. This is one.
Note:
1. Text in Blue points to additional data on the topic.
2. The views expressed here are those of the author and do not necessarily represent or reflect the views of PGurus. 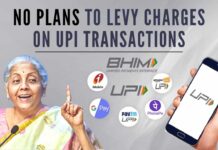