The Brandeis University in the Boston area (part 9) was the first to include “caste” in its nondiscrimination policy. The second to join the Caste Cult is the Colby College in Maine, a private liberal arts college with about 2,200 students including about 10% foreign students. The overarching question for the emerging Caste Cult is why “import” an outlawed social evil of caste-based discrimination from India to the U.S. campuses and community? Why do the cult leaders fail to understand that the caste-based social barriers in India are decidedly reduced except that people’s long-held beliefs and attitudes are slow to change?

As we remember the civil rights leader Martin Luther King this month, the academicians should work toward dismantling the racial prejudices and discrimination on campuses and in society. Did they forget the most hateful and unfortunate death of George Floyd and the violence and unrest that followed? Don’t they know that discrimination based on race, gender, religion, and color is prohibited in the U.S., yet neither people’s attitudes have changed much nor social barriers against the minorities are disbanded in decades.

To understand why Colby College joined the cult, I read the profile of Sonja Thomas[1], a faculty member of Indian ancestry, who championed the cause of adding caste in the antidiscrimination policy. She belongs to a family of Syrian Christians from India with a scholarly book Privileged Minorities[2]. She demonstrated that race, caste, gender, religion, and politics are inextricably intertwined, with power and privilege working in complex and nuanced ways. Born in a privileged family, she perhaps never experienced casteism yet she spearheaded the issue with no evidence but assumptions and generalizations. She quoted, “Because racism and casteism are both forms of descent-based discrimination, the effects are similar,” then why not think and treat casteism in terms of racism as a parallel construct?

Based on Thomas’s scholarship on caste and Christianity, “ Syrian Christians believe that St. Thomas came to the Kerala coast in the year 52 CE, performed miracles…and converted Brahmins (the “highest” or most dominant caste) to Christianity.” I refute her claim of Brahmin being a caste in 52 CE because it was only the Varna system then. The caste as a social construct was imposed by the Colonialists much later.

Thomas stated, “One of the major misconceptions is that caste is this weird ancient thing tied to Hinduism that happens elsewhere[3].” She clarifies that casteism “happens across religions,” including Christianity, Islam, Sikhism, and across South Asian countries and diasporas, also in other countries and here in the U.S., especially in the tech industry and academia. However, the last statement is unfounded and unbecoming of an academic being based on just one institution (Brandeis University) with a caste cult and one tech company (Cisco) with an unsettled caste-based discrimination case in 2021. She went on to generalize further that most people of South Asian descent in academia, including American professors like herself, are from the dominant caste. Thomas being from the dominant caste/ privileged class is not proof that “most people of South Asian descent” are like her unless she is referring to only select Indian Christians.

Thomas stated that increasingly students enrolling nationwide represent other castes. The use of “other castes” once again is her own construct with no data. She is perhaps including both the domestic and foreign students. To my knowledge, the U.S. academia did not have a caste factor until the new caste cult. How and why, then, Thomas stressed. “[Caste] discrimination has an impact on students – both South Asian Americans and other races too- in higher education and their learning.” In about 35 years at 8 institutions, I never heard of the caste discrimination and learning being impacted. Thomas, a scholar in her own right, has gone overboard in making assumptions and generalizing statements that only point fingers at her own objectivity. To her credit or lack thereof, she however persuaded Colby’s administration as follows.

Not surprisingly, her efforts were praised as proactive steps by the Dean of Diversity, Equity, and Inclusion, Tayo Clyburn. I had called and left a voice mail for him to understand his perspective but he did not return my call. Supporting Thomas’s efforts, from identifying the need to integrating the category into policy, was a dream come true, Clyburn said. Had he called back, I wanted to understand his “dream come true.”

According to Thomas, student groups like South Asian Society were also on board but no clarity on how many students on campus supported Clyburn’s dream. The office of institutional research did not return my call either about how many South Asian students at Colby. In my informed view, liberal arts institutions attract fewer students from countries like India because of no STEM programs. Clyburn stated, Colby’s decision to take this proactive step was also ideal, he believed, because of the school’s increasingly diverse population. I wanted to ask Clyburn how the caste issue was a part of the “diverse population” and not just South Asians.

I called another professor of Indian ancestry (Nikki Singh) to get a broader sense of campus climate on casteism at Colby but no callback. I respect Thomas’s scholarship on caste and Christianity proving beyond doubt that the colonial “caste” is not limited to Hinduism, casteism and racism are parallel constructs intertwined with race and religion. What I question is her propensity to take the caste issue as far as she did without the reality check? I am surprised that Thomas held teach-ins to garner further support and not just inform the community. What was motivating her and why did she seek policy change with no tangible data and evidence?

I had hoped that the scholars like Thomas, with Indian ancestry, know better not to promote a culture of caste cult on academic campuses. The caste bias may exist in the U.S. as does the racial bias but there is no evidence of widespread caste discrimination to warrant Colby’s policy change. Was Thomas seeking to be proclaimed as an expert not only on caste and Christianity but on CASTE as the world’s dominant social issue for the inequalities and discrimination larger than due to race, religion, and gender? Without the benefit of the phone calls returned, the views are based on topical research, media report[4], Thomas’s profile, and the Colby website. 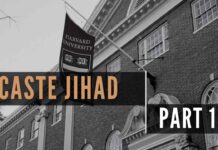 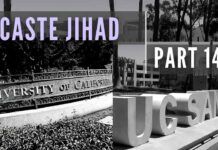