A recent Supreme Court order compelled Priyanka Gandhi Vadra to enter into active politics. This Supreme Court order also compelled the opposition parties to get united even though some parties don’t see one another eye to eye. But let us look into the great changes that have taken place in the last 30 years in Indian politics. Particularly the growth of regional parties.

The Nehru/Gandhi Sultanate (Dynasty) installed by British/Mughal sympathizers under 1947 ‘Transfer of Power Agreement while declaring Subhas Chandra Bose a war criminal (allowed and legitimated by Sri Mohandas JI) had ruled India uninterruptedly since independence till 1989, except for a brief period from 1977 to 1979. It was VP Singh who raised the issue of corruption in the purchase of Bofors guns directly charging the then PM Rajiv Gandhi of corruption and formed a unique alliance of Leftist, Rightists, Samajwadis, Mandalites etc which ultimately ended the Gandhi Dynasty rule in New Delhi. The VP Singh rule ended soon but the disintegration of Janata Dal in 1990 resulted in the growth of state-level regional parties which copied Congress style of running and functioning of regional parties without internal democracy. Thus these regional parties functioned more like RAJWADAS (Princely Estates) than democratic political parties.

In the core of the problem is the law that a politician, if convicted for more than two years, is to be debarred from contesting any election for the next six years

These Rajwadas mushroomed all over India the notable being; Samajwadi Yadav and Dalit queen Rajwadas of UP(Uttar Pradesh), Chara(Fodder Scam) Yadav Rajwada of Bihar, Ponzi Didi Bengal Rajwada, Maratha Peshwa Rajwada of Maharashtra, Chidambaram, Naidu, Gowda, Reddy Rajwadas of south etc. A peculiar similarity in the power structure of these Rajwada parties is that they follow true Durbar (Court) culture where king or queen is supreme; a voice of dissent tantamount to sedition and dynasty rule prevails over merit and inner party democracy.

Their vote bank consists of minorities (stolen from Congress) and one or two dominant local castes. Now, these Rajwadas play a big role in the formation and composition of Lok Sabha and Rajya Sabha as even smaller in numbers their combined strength is very high in the formation of a coalition government or passage of the bill in the parliament. In just a few years in power, these Rajwadas has amassed huge wealth by all the means available. They feel elated in a vulgar display of their wealth and power without any remorse. Everything was going fine. Good times started waning after changing of the guard in 2014 when a new Chowkidaar(The honest people defender Guard Prime Minister Modi) came into power. But the last blow was recent SC (Supreme Court) order.

The new SC order for criminal politicians: The SC passed an order that all criminal cases pending against politicians is to be decided within six months and special courts are to be created for this purpose. The SC has also instructed the HC (High Courts) to appoint new judges for this purpose. This order has set a cat among pigeons as the sultans, kings, queens prince, princess, son in laws and other outlaws (Party members) are facing corruption charges and criminal cases. In a number of cases charge sheet has been filed and the cases are at various stages of hearing. The moment charges are proved there will be existential crises for Rajwadas as they are family run pocket political parties with other members of the party having no say in party affairs. Once the king is checkmate the game ends.

To stave off the immediate problem the crisis managers of every Rajwadas are looking for a successor within the Raj Pariwar (The Ruling Family) who is not facing any criminal charges so that in the case of eventuality he or she may keep the throne warm if the king or queen is arrested. As such, Gandhi dynasty was compelled to bring Priyanka Gandhi Vadra into active politics as the queen mother, the  Prince and the Brother in law are charge sheeted and may have to cool their feet in prison. Similarly, the Bechara Raja of Chara Yadav dynasty of Bihar is in jail. The queen, younger prince, princess all are charge sheeted in corruption and criminal cases. This leaves, much to the dislike of family, the elder prince as the lone member of the family who is not charge sheeted in any case, although he is in news for all the wrong reasons and has put the family in various controversies and ignominy, is the only choice left as successor.

The UP Yadav dynasty is banking on their Bahus(Daughter in-laws) as last resort in the case of any judicial activism. The spinster queens of UP and Bengal have been quick to bring their original Bhatija (nephew) into an active role in the party. But all these arrangements are Ad-hoc and temporary in nature. A permanent solution is possible only if the Rajwadas come into power in New Delhi and remove certain laws as enumerated below.

The law that bars politicians from contesting in elections: In the core of the problem is the law that a politician, if convicted for more than two years, is to be debarred from contesting any election for the next six years. This law has become more lethal in the light of the SC order. Repeal of this law is the top priority of Rajwada parties.

The Benami property act: Over the years, these Rajwadas has amassed billions of dollars worth cash and property both in India and abroad through their mysterious business models. The transactions have been done through multiple-layered money transfers through shell companies. Most of the properties are Benami (No-name or not the real beneficiary).

The implementation of Benami properties act has resulted in the seizure of thousands of crores(=10million) of properties amassed by these Rejwadas through their hard work and in the name of Aam Janata ki Sewa. But the Chaukidaar is bent upon ruining their property by seizing them and closing down Lakhs(100,000) of Dabba (Shell) companies. In fact, most of Rajwadas leaders are likely to go behind bars due to this draconian law.

About 25 to 30 years ago they were on roads and by their hard labour and social work, they now have Mercedes and BMW’s, palaces and cash in foreign banks. If this Chaukidaar keeps his vendetta on against them they will soon be on roads again.

As such, this draconian law which is against the spirit of Federalism (By federalism the Rajwadas mean that the state rule should be immune of central law and interference) must be repealed in the larger interest of federalism.

Misuse of Central agencies: The Chaukidaar is misusing the agencies like CBI (Central Bureau of Investigation) and ED (Enforcement Directorate) to harass them and lodging false cases against them. Under the federal structure, a Rajwada is free to rule (loot) his state (estate) the way he or she likes without any interference from central govt or its agencies. The law and order (loot and plunder of resources of an estate) is a state subject and the state police have exclusive powers and are fully competent to investigate such cases and to book the culprit.

Hence, the role of CBI and ED should be curtailed in the matter of corruption and crime in a state to save the federal structure of the nation and the constitution of India.

Indeed, a good beginning has already been made by Naidu Rajwada and Ponzi Queen of Bengal by banning evil and anti-constitutional forces like CBI and ED in their states (Estates). Once grand Rajwada Maha-Gathbandhan comes into the power, agencies like CBI and ED will be stripped of all its powers to save federalism and the constitution of India.

To achieve these novel objectives, the major issue is to get the majority in Lok-sabha and not the post of PM so that the democracy is saved

Introduction of paper ballots in the polling: The system of paper ballots voting of the 1980s, 1990s and early 2000 has helped the Rajwadas to win elections by the help of Karyakartas (Workers / Goondas / Musclemen) threatening voters, grabbing and looting booths and other means.

The introduction of EVM killed the native spirit of our democracy. The Karyakartas (Musclemen) became unemployed and counting of votes became fair and easier. The Evil Electronic Voting Machine (EVM) must go. It is possible only when Rajwada Maha-Gathbandhan comes into power.

All these good things are only possible when Majboot (Strong) Chaukidaar is replaced by Majboor(Incapable, Not-in-control) Rajwada Maha-Gathbandhan. To save democracy, federalism, and constitution the above mentioned five anti-people laws, proceedings and central agencies must be nullified.

To achieve these novel objectives, the major issue is to get the majority in Lok-sabha and not the post of PM so that the democracy is saved. Now it is unto the common people of India to select and elect either the Majboot Chaukidaar or the Majboor Maha-Gathbandhan. 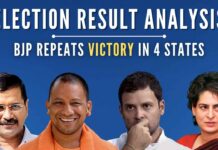 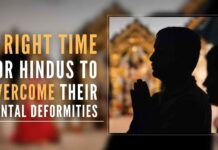 My New Letter Series – Dear Nupur, You Were Wrong In...