When former President Pranab Mukherjee said, “Many dynasties ruled till the 12th century, when Muslim invaders captured Delhi”, it led to consternation in the Left-liberal camp. The discomfort was amplified by the fact that Mukherjee made those remarks at an event organised by the RSS. The secularist camp generally refrains from referring to Muslim rulers — from those before Babur and the Mughal dynasty — as “invaders”. It has since independence, in writing the bulk of academic books and journals, sought to portray the Mughal rule as being a golden period in India’s history.

The problem is that our secularist historians consider the dynasty’s period as the ‘only’ golden age, quite forgetting that which came before

Now, it is true that the Mughal rule witnessed a flurry of activity in the areas of art, literature and architecture. Many of that period’s legacy remains with us today — the Taj Mahal and the Red Fort being two of the most prominent among the contributions. But it’s equally a fact that the Mughal dynasty converted the majority community — the Hindus — into second-class citizens, with the imposition of discriminatory taxes and the large-scale destruction of temples being some of the measures the rulers took. What’s more, historians of the Left-liberal camp who had a near hegemony in writing our history, chose to give secondary treatment to the contribution of Indian rulers, or at the very least somehow made them seem not at par with those of the Mughal emperors and their reign.

The Mughal rule lasted for a little over three centuries, though it effectively ended with the death of Aurangzeb in the beginning of the 18th century. Abraham Eraly wrote a book titled, The Mughal World: Life in India’s Last Golden Age. Perhaps he was excited by the fact that around the 17 century, when the Mughals still ruled, India had become the world’s largest economic power (nearly 25 per cent of the world’s GDP was contributed by the country), and it was responsible for 25 per cent of the world’s industrial output. But it is erroneous to attribute these achievements to the Mughals alone. After all, the Mughals did not rule all over India; indeed, their influence was largely in the northern parts.

The problem is that our secularist historians consider the dynasty’s period as the ‘only’ golden age, quite forgetting that which came before. Offhand, the Vijayanagara empire jumps to mind. It too had lasted three centuries. The ruins at Hampi are a testimony to the grandeur of the period. The Left-liberals lack enthusiasm in highlighting this empire is probably because of the fact that the Vijayanagara empire was inspired by saint Vidyaranya of the Sringeri monastery to counter the rising impact of the Muslim invasion in India. It came into being in the backdrop of various setbacks Hindu rulers such as the Yadavas and the Pandyas had faced in the Deccan region at the hands of Muslim rulers of the north. Interestingly, unlike the Mughals, the Vijayanagara empire was sustained by as many as three dynasties, apart from the Sangama dynasty which founded the kingdom.

The Maurya dynasty (322 BCE-187 BCE) had a shorter life-span, but it was one of the largest empires in the world in its time and was spread all over the Indo-Gangetic plain. Indeed, king Bindusara extended the empire’s reach to the south of India as well. Chanakya and Ashoka are two of the most prominent figures of this era. Besides, Buddhism gained momentum in India during the Maurya rule.

Then there was the Gupta dynasty which lasted for a little over three hundred years (319 CE-650 CE). This was indeed a golden period in Indian history, and at its zenith, the Gupta empire spread throughout the Indian subcontinent. The Ramayan and the Mahabharata are said to have been canonised during this period. The Gupta dynasty gave a major fillip to Indian art and literature, and iconic names such as Kalidas, Vishnu Sharma and Vatsyayana emerged during this time — not to forget the scientist Aryabhatta.

The list is long but would be certainly incomplete without a mention of the Chola dynasty, which academics acknowledge as one of the longest-ruling dynasties in the history of southern India at least. The earliest references to it are found in inscriptions left by emperor Ashoka; the Chola kings ruled right till the 13th century CE. With Sanskrit and Tamil as its principal languages, the Chola dynasty’s reign changed the face of Tamil literature by setting the stage for its robust emergence in the coming centuries. The Cholas are said to have pioneered a centralised form of governance and a bureaucratic system that would be today’s pride. The Chola school of architecture spread across southeast Asia.

Given this rich history, there is no reason why we must go overboard in singling out the Mughal rule as the golden period. But such is the sensitivity of the Left-liberals that they took great offence at Uttar Pradesh Chief Minister Yogi Adityanath’s remark recently that Maharana Pratap was a greater ruler than Akbar. Greater or not, is an issue for debate. But to shield the Mughals to an extent that they must not be compared to the Indian rulers — especially of the Hindu community — in equal measure reflects a sad bias. 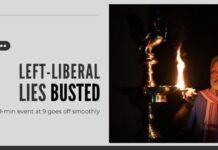