The government informed the Lok Sabha on Tuesday that the agriculture budget has been increased to Rs 1,23,000 crore which earlier used to be around Rs 21,000 crore.

Minister of States for Agriculture and Farmers Welfare Kailash Chaudhary responded to a question during the question hour that the government is incentivizing the farmers under crop diversification scheme and these incentives have also been given in horticulture. The government has also increased the Minimum Support Price (MSP) of different crops and is committed to increase the income of the farmers.

Chaudhary also informed that earlier, the state government used to send a memorandum to the Centre for central assistance but now the Centre sends an expert team to the affected areas soon after natural calamities occur and releases assistance to the state for farmers.

Responding to the DMK Member T R Baalu’s question on providing central share to Tamil Nadu in SDRF, Union Agriculture Minister Narendra Singh Tomar said that the Centre releases funds to SDRF twice a year. Under this scheme, the Union Home Ministry gives 75 percent and 25 percent is added by the state. He also said that if the SDRF fund seems insufficient, then the Centre gives additional funds to SDRF. Tomar also assured that Tamil Nadu’s dues will be released soon by the Centre.

The Minister of State for Agriculture also informed the house that the government has initiated a scheme for crop diversification and encourages the farmers to grow such crops which require less capital investment. Describing that one kg of paddy crops require 3,000 to 5,000 liters of water, he said that farmers are advised to cultivate different crops and also given incentives.

Responding to another question that if a farmer which is cultivating paddy or wheat for many years, may hesitate to shift to other crops apprehending loss due to many reasons, the Minister said that in case of loss, the farmers may be compensated through the crop insurance, SDRF, and other schemes. 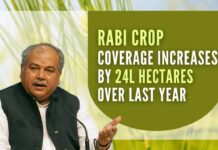