On Wednesday midnight persons riding a two-wheeler had thrown the petrol bombs at the Bhartiya Janata Party headquarters in Tamil Nadu. Fortunately, no one was injured in the attack.

Miscreants hurled petrol bombs at the BJP office in Chennai and escaped after evading the police. Based on CCTV footage, police have arrested a man from Chennai’s Nandanam.
Police said one person by the name of Vinoth has been taken into custody and the investigation into the attack was on.

According to police sources, the accused, Kaduka Vinoth, is a history-sheeter who is known for hurling petrol bombs after taking money. During questioning, the accused stated that he hurled petrol bombs as he was upset over BJP supporting the NEET Bill.

Police have also confirmed that Vinoth has several cases pending against him. He had hurled petrol bombs at a state-run TASMAC liquor shop in 2015 and also at the Teynampet police station in 2017.

The BJP blamed the Tamil Nadu government for the incident. BJP’s Karate Thyagarajan said, “A petrol bomb was hurled at our office around 1:30 am. We have informed the police and the BJP cadre will not get afraid of such things.” 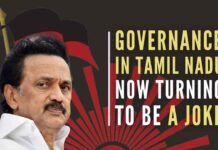