[dropcap color=”#008040″ boxed=”yes” boxed_radius=”8px” class=”” id=””]B[/dropcap]ritain on Thursday carried out its first airstrikes against Islamic State (IS) in Syria, hours after members of parliament voted overwhelmingly to authorise military action.

Air Force (RAF) Tornado jets took off from the Akrotiri base in Cyprus and the defence ministry later confirmed that they had carried out the “first offensive operation over Syria and have conducted strikes”, The Guardian reported.

The strikes focused on six targets in an oil field under IS control in eastern Syria.

The strikes came hours after members of the House of Commons late Wednesday night voted by 397 to 223 in favour of sending Tornado jets to seek out IS targets in Syria.

A total of 66 opposition Labour Party MPs voted in favour with the government.

The defence ministry is expected to give details of the targets later on Thursday.

The targeting of oil infrastructure is part of its strategy to deprive the extremists of their funding and revenue streams.

The RAF was already carrying out operations against IS in Iraq. 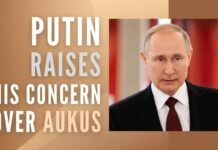 Pt Satish K Sharma asks “Why should Brits be forced to take the “Call to Prayer?”