Case is registered against Samajwadi Party social media cell under charges of 153A, 295A, 505, and 66 IT Act

An FIR has been lodged by journalist Manish Pandey against the social media handle of the Samajwadi Party (SP) for promoting enmity between different groups of people.

The social media handle used derogatory language while tweeting the journalist’s post, which had nothing to do with the SP, and even posted threatening messages for him.

In his FIR, Pandey said the SP Media Cell posted an inflammatory, controversial, and politically motivated tweet on Gorakhnath Mutt from its Twitter handle and he, in turn, tweeted on November 20 appealing that they should refrain from making unsavoury comments on the Gorakhnath Mutt as it was a centre of the devotion of crores of Hindus.

“I wrote that they should avoid politicizing the Gorakhnath Mutt and keep themselves limited to 5 Kalidas Marg, BJP headquarters, and CM’s official residence. Soon after, I started getting abusive and unbecoming comments,” the journalist said in the FIR.

Pandey said he ignored the comments initially, but on Tuesday they crossed the limits. “I tweeted saying ‘UP ke do anmol ratan, inki muskurahat dekh kar kaiyon ke kaleje me dhuan nikalne lagta hai‘ (There are two stars of UP whose smile may cause heartburn to many).

In its reply, the SP media cell posted abusive and insulting posts against me and their comments made me feel humiliated, he said in the FIR.

Pandey said those who posted abusive tweets against him should be taken to task.

“The Twitter handle of the SP was fanning communal tension and hatred among people when the atmosphere was quiet in UP. They are posting such messages to gain political mileage. So, their act needs police action, which will prevent them from making unbecoming comments against Guru Gorakhnath Mutt and from vitiating the peace and harmony in the society,” he said.

DCP Central Zone, Aparna Rajat Kaushik said a case was registered under the charges of 153A (promoting enmity between different groups on grounds of religion), 295A (deliberate and malicious acts intended to outrage religious feelings), 505 (publishing or circulating any statement, rumour or report with intent to incite) and 66 IT Act. 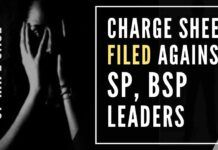