A total of 26 Naxals were neutralized by Maharashtra Police in a long encounter in Gadchiroli. 3 police personal received minor injuries & are hospitalized in the encounter.

The C-60 commandos, an elite wing of the police, had recovered bodies of 26 Naxals during a search after the encounter, and Teltumbde, one of the wanted accused in the Koregaon Bhima-Maoist links case, was suspected to be among the dead.

Milind Teltumbde was a wanted Naxalite who is now dead in the encounter. The NIA had charged him with almost 2 dozen charges, including under the stringent UAPA for his involvement in the Bhima-Koregaon Elgar Parishad case.

A central committee member of the banned CPI (Maoist), Teltumbde had carried a reward of Rs.50 lakh on his head. During the investigation, it was revealed that senior leaders of CPI (Maoist) were in contact with the organizers of Elgar Parishad.

NIA said, “Teltumbde was allegedly responsible for the CPI (Maoist) making in roads through the members of Kabir Kala Munch and other frontal organizations.” 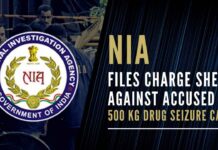 SC refuses to entertain pleas of Amazon, Flipkart – they have...