Proposed amendments to Cinematograph Act 1952, which will allow re-certification, penalization of films piracy

Addressing a consultation meeting of film associations through video conferencing, the Information and Broadcasting (I&B) Ministry has assured the film fraternity that ‘suitable’ amendments would be proposed to the ‘Cinematograph Act 1952‘ to combat film piracy.

I&B Secretary Apurva Chandra said that the issues with respect to the proposed ‘Cinematograph Amendment Bill‘ and anti-piracy issues will be addressed after consultation with the stakeholders of the industry.

Chandra expressed that the basic objective is NFDC should become the entity through which the revenues from the film industry can be utilized for the development of the industry.

“None of the existing schemes is being discontinued. We will strengthen NFDC so that they can rotate staff and deliver on the responsibilities assigned to them,” he said.

Speaking about the Finance Minister’s announcement of setting up an Animation, Visual Effects, Gaming, and Comic (AVGC) Promotion Task Force, Chandra said that the ministry is working on its ‘terms of reference‘.

“We hope to set up this Task Force in this month itself so that work can begin and we are able to utilize the potential of the sunrise sector,” he said.

Chairperson, Central Board of Film Certification (CBFC) Prasoon Joshi said that the change in the design of the film certificate is symbolic of what the Board seeks to achieve, in terms of making processes seamless, digital, and more stakeholder-friendly.

“The process of certification has been smoothened as much as possible; while we continue to need human intervention for watching the films and certifying it, we have streamlined the system so as to speed up other parts of the process,” Joshi added.

The meeting in Mumbai followed a similar consultation with the film fraternity from South India, held in Chennai on Thursday. 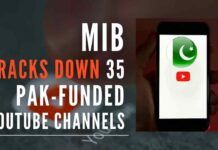