Two people have been arrested in connection with issuing death threats to the Special Bench judges of the Karnataka High Court who dismissed the petitions seeking permission to wear hijab inside the classrooms.

While Kovai Rahamathulla was arrested from Tirunelveli, S Jamal Mohammad Usmani was taken into custody from Thanjavur. Both the arrests took place on Saturday night.

The accused are office bearers of the Tamil Nadu Towheed Jamaat (TNTJ). The Jamaat had recently held a public meeting in the Koripalayam area of Madurai regarding the Karnataka High Court’s ruling.

A speech of one of the functionaries has now gone viral for the wrong reasons. He quoted the instance of the Jharkhand High Court judge’s death and warned that judges may now have to face dire consequences over the Hijab verdict. In the video of the accused Kovai Rahamathulla, he instigates violence against the Karnataka judges. He even stated that people know where the Chief Justice of Karnataka goes to walk in the morning.

In Karnataka, Vidhana Soudha police Bengaluru has booked an FIR based on the complaint by advocate Sudha Katwa. In the complaint, it is mentioned that there is a death threat, criminal intimidation, use of abusive language, and also breach of peace, as well as communal harmony, in the state.

The police have registered the FIR under IPC Sections 506 (1), 505 (1) (B), 153 A, 109, and 504. The arrests were made after multiple complaints against the accused in Karnataka and Tamil Nadu. Police sources said that several persons have been booked in this connection. 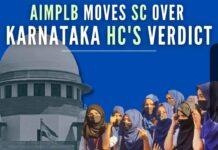