In the upcoming April 2022 policy meet, the Reserve Bank of India (RBI) is expected to prioritize growth over inflationary fears. Inflation is expected to remain at elevated levels due to higher crude oil prices in subsequent months owing to the Russia-Ukraine crisis.

Notably, the consumer price index (CPI) inflation print has remained at an elevated level due to higher-than-expected vegetable prices in February.

Motilal Oswal Financial Services said, “Nevertheless, we still expect the RBI to prioritize growth in its April 2022 monetary policy meet as we believe growth is still a bigger concern currently rather than inflation. We expect inflation in the range of 5.2-5.4 percent YoY in FY22.”

He added, “Within food, vegetables primarily caused the spike in inflation as excluding vegetables, CPI came in at 6.1 percent YoY similar to the level seen in January 2022. Other items such as cereals and products, meat and fish, spices, and sugar and confectionary that constitute 17 percent weight in CPI index also contributed to higher inflation.”

All three components of core inflation remained broadly flat with no major movement. Slightly higher inflation in housing, and clothing and footwear were offset by marginally low inflation in miscellaneous items. 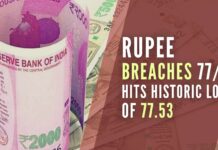