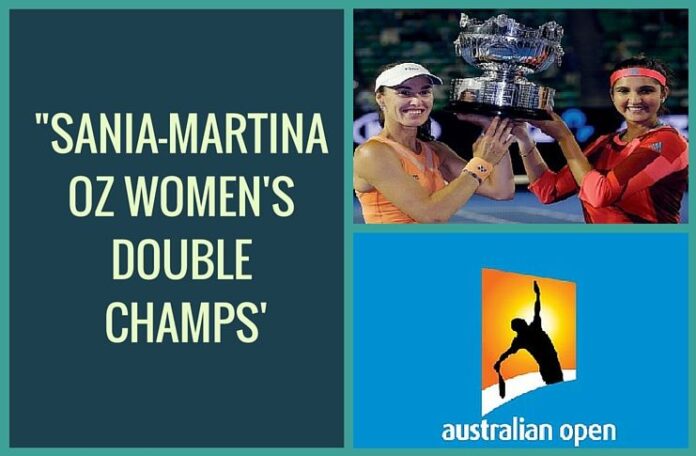 The Sania-Martina juggernaut, that began rolling in August last year, showed no signs of abetting at the Melbourne Park. They continued their supreme form and grabbed their eighth successive title, and 12th overall, in 109 minutes.

They began 2016 by winning in Brisbane and Sydney.

It was Sania’s second Australian Open title. She first won the mixed doubles title in 2009 with Mahesh Bhupathi.
[dropcap color=”#008040″ boxed=”yes” boxed_radius=”8px” class=”” id=””]T[/dropcap]he first set was evenly contested on Friday as both teams tried to seize the initiative. It took Sania and Martina 62 minutes to determine its fate, an indicator of severe nature of the battle.

Both teams won four break points in the first set and were even in almost every aspect.

The Indo-Swiss pair hit 17 winners, one less than their opponents, and committed 17 unforced errors, one more than them. But they won 50 of the total 96 points played in the first set.

Each point was fiercely fought as several long rallies were played with the action unfolding at a swift pace. The set went its full distance and Sania-Hingis were at their dominant best in the tie-break, clinching it 7-1.

They carried forward the momentum in the second set and broke immediately to jump to a 2-0 lead, converting their second break point.

The World No.1 doubles team intensified their pressure and broke again, in the fifth game, to jump to a commanding 4-1 score line.
[dropcap color=”#008040″ boxed=”yes” boxed_radius=”8px” class=”” id=””]B[/dropcap]ut the Czech pair refused to bow without a fight and promptly broke back twice to make it 5-3. But it only spurred Sania-Martina, dubbed SanTina by their fans, as they closed out the contest in the next service game.

“We were pushed to the limit today, especially in the first set,” Hingis said after the match.