Security forces in Kashmir valley Sunday achieved major success by neutralising six top commanders of two big terrorist outfits Lashkar-e-Toiba and Hizbul Mujahideen in Batagund area of Kapran in Shopian. Meanwhile, one civilian was killed during protests near the encounter site and several others were injured in incidents of stone pelting and police action on the ground.

Earlier, Umer Majid had escaped from Batmaloo encounter. He had recently circulated his pix on social media showing his presence near clock tower Lal Chowk.

He along with 15 other top commanders claimed to have attended a meeting in Hazratbal last week to discuss their future strategies and recruitment process of radicalised youth.

This is the second major operation since Friday in which six terrorists were also killed by the joint team of security forces in Sekipora area of Bijbehara in Anantnag district.

Police spokesman said the operation was launched on the basis of a credible input about the presence of terrorists in Batagund area of Kapran in District Shopian.

“A cordon and search operation was launched in the intervening night jointly by Police and security forces in the area”, the spokesman added.

As the searches were going on, the search party was fired upon by the terrorists. The fire was retaliated leading to a gunfight.

Initially, one jawan of 34 RR sustained injuries in the exchange of fire. He was evacuated to the hospital and is stated to be stable now. However, one Jawan identified as Nazir Ahmad of 34 RR who got grievously injured in the final phase of the encounter has succumbed and attained martyrdom.

In the ensuing encounter, six terrorists were neutralized and the bodies were retrieved from the site of encounter.

Soon after the operation started in the Kapran area of Shopian large number of local residents converged near the encounter site and pelted stones on security forces.

According to police, few individuals sustained injuries at the encounter site and have been evacuated to hospital for medical attention.

Incriminating materials including huge quantity of arms and ammunition were recovered from the site of encounter.

Police has also appealed local residents not to venture inside the encounter zone since such an area can prove dangerous due to stray explosive materials. People are requested to cooperate with police till the area is completely sanitized and cleared of all the explosives materials if any.

It was a combined group of HM and LeT, as per police records.

Mushtaq Ahmad Mir @Hammad was affiliated with LeT and was operating as District commander for Shopian, while Mohd Abaas, Waseem Wagay, Umar Majeed Ganai and Khalid were with Hizbul Mujzhideen.

All the six killed terrorists were wanted by the law for their complicity in a series of terror crimes including attack on security establishments and civilian killings in the area. With their elimination, all notorious terrorists of the belt have been successfully eliminated.

As per the police records, Mushtaq Ahmad Mir @ Hammad had a long history of criminal terror crimes since 2014. He was a close associate of terrorist commander Zeenat-ul-Islam and was involved in several terror attacks on security establishments and civilian killings.

Similarly Khalid Farooq was also involved in several terror crimes and was part of terror groups responsible for killing of security forces and civilians in the area. One Pakistani terrorist killed in today’s encounter was wanted in the gruesome killing of civilians in the area including the throat slitting video uploaded on Social media. 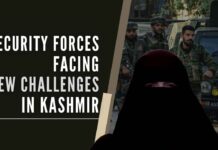