Mukesh Ambani‘s Reliance Jio has made an Rs.14,000-crore earnest money deposit for the forthcoming 5G spectrum auction. Adani Group made a modest Rs.100 crore deposit for the bidding spectrum for their internal connectivity in the ports and the power sector. Earnest money deposit is reflective of the quantity of airwaves a company can bid for in the auction. A total of 72 GHz (gigahertz) of spectrum worth at least Rs.4.3 lakh crore will be put on the block during the auction, scheduled to begin on July 26.

While the earnest money deposit suggests that Jio, the nation’s largest telecom company by subscribers, may be bidding very aggressively in the upcoming auctions, Adani Group may be looking to buy the bare minimum spectrum needed to set up a private network. The earnest money deposits of all the four applicants seeking 5G radiowaves add up to Rs.21,800 crore, a level substantially higher than Rs.13,475 crore deposited in the 2021 auction when three players were in the race.

Earlier this month, billionaire Gautam Adani’s group confirmed it is in the race to acquire spectrum, which it said will be used to create a private network to support its businesses from airports to power as well as data centers. Adani Group had made it clear that its intention is not to be in the consumer mobility space.

As per the Department of Telecom’s (DoT) website, Sunil Mittal-led Bharti Airtel has put in Rs.5,500 crore as EMD, while for Vodafone Idea the amount stands at Rs.2,200 crore. Typically, EMD amounts give an indication of players’ appetite, strategy, and plan for picking up the spectrum in an auction. It also determines the eligibility points, through which telcos target specific amounts of spectrum in various circles.

Market watchers say that a telco has the ability to go after radiowaves worth up to 7-8 times the EMD amounts submitted by them, although players do tend to keep headroom for maneuvering and flexibility, based on how auction proceeds and the strategy adopted by rivals. Industry experts estimate that based on EMD, Jio can place bids worth Rs.1.27 lakh crore, Bharti Airtel Rs.48,000 crore, VIL Rs.20,000 crore, and Adani Data about Rs.700 crore. With its EMD at Rs.14,000 crore, the eligibility points assigned
to Jio for the auction stand at 1,59,830, the highest in the list of four bidders, according to details put out by DoT.

The eligibility points allocated to Airtel are 66,330, while Vodafone Idea’s are 29,370. Adani Data Networks received eligibility points of 1,650, based on its deposit. Promoter Adani Enterprises’ net worth has been taken into consideration, while computing the eligibility of Adani Data Networks, resulting in total a net worth of Rs.4,979 crore. The net worth of Reliance Jio Infocomm, a subsidiary of Jio Platforms Ltd – the unit that holds the digital assets of Reliance – stood at Rs.1,97,790 crore. 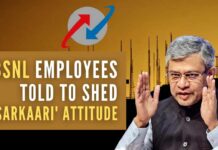