Journey of Bipin Rawat to becoming CDS Chief, a look at his achievements

The sad and untimely demise of CDS Gen Bipin Rawat has left India in a shock. Indians mourned the loss of Chief of Defence Staff General Bipin Rawat, his wife Madhulika Rawat, and 11 others who died in an IAF helicopter crash on Wednesday near Coonoor in Tamil Nadu.

CDS Rawat was India’s first Chief of Defence Staff. A day before he was to retire from service after completing a three-year term as Army Chief, General Bipin Rawat became India’s first CDS. The CDS would act as the principal military adviser to Defence Minister on all matters relating to the tri-services.

Rawat’s family had been serving in the Indian Army for multiple generations. His father Laxman Singh Rawat rose to the rank of Lieutenant General in the army.

Rawat completed his schooling from Dehradun and Shimla. He was a graduate of the Defence Services Staff College (DSSC), Wellington, and the Higher Command Course at the United States Army Command and General Staff College at Fort Leavenworth, Kansas. He had an MPhil degree in Defence Studies as well as a diploma in Management and Computer Studies from the University of Madras.

Rawat joined the National Defence Academy, Khadakwasla, and the Indian Military Academy, Dehradun, where he was awarded the ‘Sword of Honour‘.

Rawat was commissioned into the 5th battalion of 11 Gorkha Rifles in 1978, the same unit as his father.

After promotion to Major General, Rawat took over as the General Officer Commanding 19th Infantry Division (Uri). As a Lieutenant General, he commanded III Corps, headquartered in Dimapur before taking over the Southern Army in Pune.

He was involved in the 1986 operations in the Eastern Sector facing China, was posted in militancy-infested Pulwama in the 19 Division, and successfully handled responsibilities in several operations in the northeast. He has much experience in high-altitude warfare and spent ten years conducting counter-insurgency operations.

He was instrumental in reducing the militancy in the northeast, with one of the highlights of his career being the 2015 cross-border operation into Myanmar in which the Indian Army successfully responded to an ambush by NSCN-K militants.

His untimely death is an irreparable loss to our Armed Forces and the country. 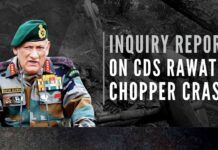 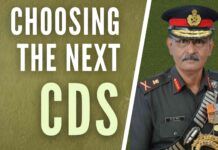