Former BJP leader, Swami Prasad Maurya, had switched to Samajwadi Party chief Akhilesh Yadav’s camp along with four MLAs a month before the elections started in February. He lost his seat of Fazilnagar to BJP’s Surendra Kumar Kushwaha. Bhim Army chief Chandra Shekhar Azad ‘Ravan‘ who contested against Yogi Adityanath from Gorakhpur could get only 6139 votes. Subhawati Shukla of the SP lost to CM Yogi as Yogi established a lead of over 55,000 votes over in Gorakhpur. UP chief Ajay Kumar Lallu of Congress loses to Asim Kumar of BJP. Vinay Shankar Tiwari of SP loses to Rajesh Tripathi of BJP.

Most of the candidates of the All India Majlis-e-Ittehadul Muslimeen have not been able to cross the 5,000-mark in the Uttar Pradesh assembly elections, according to poll trends. The vote share of the Asaddudin Owaisi-led party was just around 0.43% of the total votes polled across the 403 Assembly seats in the state.

Meanwhile, the blame game has begun in Congress after their disastrous show in the Assembly elections. Addressing a press conference in New Delhi, senior Congress leader Randeep Singh Surjewala said people of Punjab voted in favour of AAP as they were unhappy with Amarinder’s regime.

“In Punjab, Congres presented a new leadership through Charanjit Singh Channi, who is the son of the soil, but the entire anti-incumbency of 4.5 years under Captain Amarinder Singh could not be overcome and hence people voted for AAP for change,” Surjewala said.

Channi, Sidhu, and Captain were the centre of a divided Congress house months before the election. A massive and unprecedented revamp followed with Amarinder Singh’s sacking from the CM post and his unceremonious exit from the grand old party last year after a long-drawn feud with Sidhu turned bitter.

Channi was brought in as Singh’s replacement (making him Punjab’s first Dalit CM) and Sidhu was made party chief in the state. However, all was not well between Sidhu and Channi too with several reports of falling out of the two leaders making headlines.

In Manipur, P Saratchandra of Congress lost to CM N Biren Singh by 18,271 votes in Heingang seat. Saratchandra joined the Congress, a day after he quit the saffron camp, having failed to secure a ticket for Manipur Assembly polls. 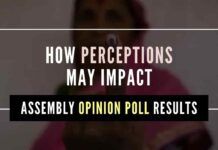 Goa BJP Minister accuses the party of edging with Parrikar followers, says BJP no longer party with a difference