[dropcap color=”#008040″ boxed=”yes” boxed_radius=”8px” class=”” id=””]T[/dropcap]he recent kerfluffle about Bernie Sanders purportedly not knowing how to bust up the big banks says far more about the threat Sanders poses to the Democratic establishment and its Wall Street wing than it does about the candidate himself.

Of course Sanders knows how to bust up the big banks. He’s already introduced legislation to do just that. And even without new legislation a president has the power under the Dodd-Frank reform act to initiate such a breakup.

Regulation won’t end the Street’s abuses. The Street has too much firepower. And because it continues to be a major source of campaign funding, no set of regulations will be tough enough.

But Sanders threatens the Democratic establishment and Wall Street, not least because he’s intent on doing exactly what he says he’ll do: breaking up the biggest banks.

The biggest are far larger today than they were in 2008 when they were deemed “too big to fail.” Then, the five largest held around 30 percent of all U.S. banking assets. Today they have 44 percent.

Which means they’re now way too big to fail. The danger to the economy isn’t just their indebtedness. It’s their dominance over the entire financial and economic system.

Bernie Sanders isn’t the only one urging the big banks be broken up. Neel Kashkari, the new president of the Federal Reserve bank of Minneapolis – a Republican who used to be at Goldman Sachs – is also pushing to break them up, as has the former head of the Dallas Federal Reserve, among others.

Recall that just eight years ago the biggest banks were up to their ears in fraudulent practices – lending money to mortgage originators to make risky home loans laced with false claims, buying back those loans and repackaging them for investors without revealing their risks, and then participating in a wave of fraudulent foreclosures.

[dropcap color=”#008040″ boxed=”yes” boxed_radius=”8px” class=”” id=””]D[/dropcap]odd-Frank addressed these sorts of abuses in broad strokes but left the most important decisions to regulatory agencies. Since then, platoons of Wall Street lobbyists, lawyers and litigators have been watering down and delaying those regulations. For example, Dodd-Frank instructed the Commodity Futures Trading Commission (CFTC) to reduce certain risks, but the Street has sabotaged the process.

In its first major rule under Dodd-Frank, the CFTC considered 1,500 comments, largely generated by and from the Street. After several years the commission issued a proposed rule, including some of the loopholes and exceptions the Street sought.

Wall Street still wasn’t satisfied. So the CFTC agreed to delay enforcement of the rule, allowing the Street more time to voice its objections. Even this wasn’t enough for the big banks, whose lawyers then filed a lawsuit in the federal courts, arguing that the commission’s cost-benefit analysis wasn’t adequate.

As of now, only 249 of the 390 regulations required by Dodd-Frank have been finalized. And those final versions are shot through with loopholes big enough for Wall Street’s top brass to drive their Ferrari’s through.

The biggest banks still haven’t even come up with acceptable “living wills,” required under Dodd-Frank to show how they’d maintain important functions while going through bankruptcy.

[dropcap color=”#008040″ boxed=”yes” boxed_radius=”8px” class=”” id=””]M[/dropcap]eanwhile they continue to gamble with depositor’s money. Many of their operations are global, making it even harder for U.S. regulators to rein them in – as evidenced by JPMorgan Chase’s $6.2 billion loss in its “London Whale” operation in 2012.

The bottom line: Regulation won’t end the Street’s abuses. The Street has too much firepower. And because it continues to be a major source of campaign funding, no set of regulations will be tough enough.

So the biggest banks must be busted up.

When I debated former Rep. Barney Frank about this on television recently, he kept asking, rhetorically, what limit I’d put on their size.

A good rule of thumb might be to cap the assets of any bank at about 2 percent of the nation’s Gross Domestic Product – or roughly $330 billion. (To put this in perspective, by the end of 2015, Goldman Sachs’s assets exceeded $860 billion.)

That cap wouldn’t harm America’s financial competitiveness and it wouldn’t cause bank employees to lose their jobs (at worst, they’ll just become employees of a smaller bank).

But it would ensure the safety of the American economy. Extra bonus: It would also reduce the power of Wall Street over our democracy. 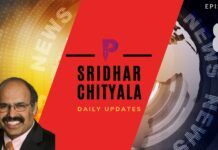 #Episode8 Daily Updates with Sridhar – Crisp, Clear and Concise look at the day ahead