It had to happen… The last time around, a bunch of (professional?) protestors threw eggs and other pieces of trash at the Indian High Commission building, causing a significant amount of damage to the exteriors. The British Indian community had to come together, pitch in with their time and get the building cleaned and then spruced up. The unruly elements, having tasted success, were winding up for an encore during Diwali, just days away. The British Indian community was concerned and approached their Members of Parliament, to see if a repeat can be avoided.

To this end, Bob Blackman, Member of Parliament for Harrow East, made an impassioned plea in the Parliament today, saying that Pro-Pakistani elements who had held a violent protest a few weeks ago, maybe amassing close to 10,000 protestors to come and protest outside the Indian High Commission building coming Sunday (October 27). He wanted to know what the Government was going to do about it. Boris Johnson, quickly stood up and said that the Home Secretary will be taking it up on a priority basis to ward off any chance of violence occurring. It is hoped that such mis-adventurism on part of a rowdy mob is nipped in the bud and British Indians should be allowed to celebrate one of the most important festivals of the year.

#BREAKING: Police in UK deny permission to Pakistan Govt/ISI sponsored protest to assemble outside Indian High Commission on #Diwali after British MP @BobBlackman raised the issue in the House of Commons. PM @BorisJohnson says such intimidation by anyone is unacceptable in UK. pic.twitter.com/4069hmvxkg

According to the above tweet, permission has been denied to hold protests… Stay tuned. PGurus will be coming up with a detailed video on this shortly. 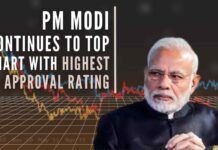