Not a single incident of a riot since 2017: CM Yogi Adityanath

On Sunday, the Chief Minister of Uttar Pradesh Yogi Adityanath said that offering namaz on the roads on the occasion of Eid has stopped completely after the Bhartiya Janata Party (BJP) returned to power in the state.

Loudspeakers at mosques in Uttar Pradesh have either turned down their volume or been removed, the CM said adding that uninstalled public address systems are being donated to schools and hospitals.

Talking about the grand Ram temple being built in Ayodhya and the renovated Kashi Vishwanath temple complex, Yogi said the BJP government is developing a pilgrimage site in every assembly constituency of Uttar Pradesh.

CM Yogi said, “Ram Navami was celebrated in a grand manner in Uttar Pradesh. There was no violence anywhere in the state. For the first time in Uttar Pradesh, namaz on Eid and on Alvida Juma (last Friday of Ramadan) has not been held on the road.”

Earlier there used to be riots in Muzaffarnagar, Meerut, Moradabad, and other places followed by curfews for months but now not a single riot has been reported in the last five years, he said.

He also said that his government has closed the illegal butcher houses in the state. We have built Gaushala for cows in the state to keep them safe and healthy and loudspeakers from religious places have also been removed, the UP CM said. Earlier cattle roaming on roads and in the fields were smuggled into illegal slaughterhouses and to stop this we established over 5,600 stray cattle shelters, he said. 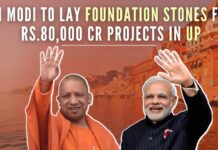