After 2 years, CM Yogi Adityanath to lead the Holika Dahan in Gorakhpur

The Uttar Pradesh Chief Minister Yogi Adityanath is set to lead the ‘Holika Dahan‘ procession in Gorakhpur on Thursday evening and also the ‘Bhagwan Narsingh Holikotsav Shobha Yatra’ which is on Saturday.

Yogi Adityanath will reach Gorakhpur on Thursday evening on a three-day visit.
Every year, the head of the Goraksh Peeth, drenched in colours, rides Bhagwan Narshingh Rath and exchanges Holi wishes with everyone without any discrimination during Narsingh Shobha Yatra.

These events were not held in the past two years due to the pandemic.

Dwarika Tiwari, the temple secretary said, “The Narsingh Shobha Yatra named after Lord Narsingh, who killed demon king Hiranyakashyap, was started in 1945 by Mahant Digvijaynath, the predecessor of Yogi’s mentor Mahant Avaidyanath and since then has continued till date.”

The yatra passes through the busy Sarrafa market via the narrow lanes of the city where it is greeted by locals by colours and rose petals.

The procession, which is joined in by a large number of BJP and RSS leaders and workers, covers 5 kilometers and culminates at the temple. Later, Yogi Adityanath will attend a function with eminent citizens where ‘Phagua‘– singing of holy songs is a major attraction.

“This is the occasion when devotees get direct opportunity to play colours with Peethadeeshwar,” said a BJP leader.

“For all these years Yogi had been leading the procession as local MP and head priest and it was in 2018 that he joined the procession as the chief minister. Tight security arrangements have been made for the occasion and drone cameras will keep a watch on the events from the sky.” 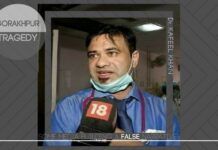 Viswanathan Anand: A Champion In Many Ways