Why is Congress eying on Hindu temples gold?

Former CM of Maharashtra Prithviraj Chavan of the Congress deserves to be strongly condemned for demanding the takeover of “One trillion dollars worth of gold” lying with various Devasthans for pulling the nation out of the current economic crisis! These gold have been donated by Hindus to the temples over the past several generations[1]. Why should it be used for the benefit of non-Hindus?

Over 3.5 lakh Hindus were ejected out of the Kashmir Valley by Pak-sponsored ‘Jihadis.’ So gold from Hindu temples will benefit them also! Does Congress want to reward the Jihadi rapists and murderers? Why Chavan is not demanding the take-over of billions of dollars received by Muslim and Christian NGOs from Saudi Arabia and other countries?

Does the Congress want to reduce Hindu temples to penury?

The party has obviously not learned a lesson from the severe drubbing it received at the hands of Hindus in the last two elections to the Lok Sabha. In a way, I am not in the least surprised by Chavan’s demand.

Congress is not only adopting a blatantly anti-Hindu policy but even on international issues, it is trying to destroy national consensus built assiduously by successive governments.

After all, wasn’t it Manmohan Singh who declared that the minorities have first right over the nation’s resources! Singh put even Jinnah to shame. Incidentally, the Congress’ Kapil Sibal had appeared for a Muslim client in the Supreme Court and vehemently opposed Hindus’ claim over Ramjanambhoomi. It’s a different matter that the apex court upheld the Hindu litigants’ contention.

Congress is not only adopting a blatantly anti-Hindu policy but even on international issues, it is trying to destroy national consensus built assiduously by successive governments. Rahul Gandhi’s congratulatory message to Pulitzer prize-winning photographers of Kashmir is a case in point. The lensmen were given the prize for shooting pictures of Jihadis fighting the Indian army. But the prince had no qualms about that.

Earlier, the leader of the Congress in the Lok Sabha Adhir Ranjan Choudhury stated on the floor of Parliament that Kashmir is an international dispute thereby endorsing Pakistan’s stand. Sonia Gandhi was sitting right behind Choudhury and she did nothing to distance her party from the dangerously anti-national statement which was expectedly exploited by Islamabad.

YSR Reddy, a staunch Christian and supporter of Sonia Gandhi, gave a huge boost to evangelization in Andhra Pradesh when he was the chief minister. He even set up government corporations of Christians to aid the community and gave subsidy for pilgrimages to Jerusalem, but none for Hindus.

At this rate, it is only a question of time before the Congress is reduced to a political rump like the Majlis-e-Ittehad-ul-Muslimeen.

#Stimulus.@PMOindia Govt. must immediately appropriate all the gold lying with all the Religious Trusts in the country, worth at least $1 trillion, according to the #WorldGoldCouncil. The gold can be borrowed through gold bonds at a low interest rate. This is an emergency.PC 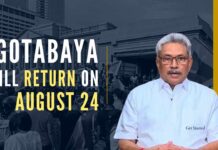 Gotabaya Rajapaksa to return to Sri Lanka on August 24, says his cousin