[dropcap color=”#008040″ boxed=”yes” boxed_radius=”8px” class=”” id=””]C[/dropcap]ongress party legislators on Monday joined hands with the principal opposition party National Conference (NC) inside the state assembly in showing disrespect to the National Anthem on the first day of the month long Budget session of the state Assembly.

Outside the hall the police band was directed to make way for the Governor before he boarded his cavalcade and returned to Raj Bhawan.

As legislators belonging to opposition parties repeatedly tried to disrupt the Governor’s address inside the central hall he was left with no other option but to hastily cut short his address before stepping out.

It is when he was stepping out of the central hall National Anthem was played out by the police band.

Instead of standing in attention Governor too stepped out of the hall as opposition legislators went ahead with their sloganeering and chest thumping.

Outside the hall the police band was directed to make way for the Governor before he boarded his cavalcade and returned to Raj Bhawan.

[dropcap color=”#008040″ boxed=”yes” boxed_radius=”8px” class=”” id=””]T[/dropcap]he National Anthem was abruptly stopped due to prevailing chaos and confusion in the central hall. It is for the first time National Anthem was disrespected by the elected representatives inside the state legislature complex.

National Conference staged this protest demonstration on the first day of the Budget session to corner the PDP led alliance government in the state.

The commotion had earlier started soon after Governor stepped inside the central hall to deliver address to the joint session.

Holding the BJP-PDP alliance government headed by Mehbooba Mufti responsible for hundreds of civilian killings, use of pellet guns which blinded over 200 youth of different age groups in Kashmir valley National Conference and Congress legislators staged vociferous protests to corner the alliance partners.

National Conference staged this protest demonstration on the first day of the Budget session to corner the PDP led alliance government in the state.

During the session they want to discredit the PDP in the eyes of their electorate by holding them responsible for poor governance and using brutal force against the Kashmiri youth during the prolonged cycle of violence.

Congress exposes BJP over its U-Turn on Article 370?

[dropcap color=”#008040″ boxed=”yes” boxed_radius=”8px” class=”” id=””]T[/dropcap]he Congress party on the other hand adopted a new strategy of siding with the National Conference to beat BJP in its own game. Congress party deliberately aligned with the Kashmir based National Conference to give this impression to the electorate that they are raising their voice against the use of brutal force by the BJP-PDP alliance govt against the Kashmiris.

Instead of responding to the questions on shifting goal posts the Congress party was busy turning the tables on the BJP by raising questions on their U-turn on Article 370, granting citizenship rights to the West Pakistan Refugees and doing away with the idea of having two flags, two constitutions and two heads of the state. 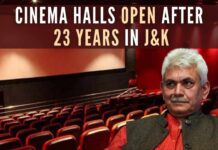 Four-way split of J&K is the only viable solution