While speaking at a webinar organized by the Ministry of Defence, Prime Minister Narendra Modi said that the Indian Defence Ministry will come up with a third list of defence items banned for import very soon.

Prime Minister addressed a post-budget webinar titled ‘Aatmnirbharta in Defence – Call to Action‘ on the announcements made in the budget. Stressing upon Atmanirbharta, he said, “A total 70 percent has been allocated for domestic defence industry this budget.”

Prime Minister Modi recalled that India’s defence manufacturing was quite strong even during the period of slavery and in the immediate aftermath of independence.

Indian-made weapons played a major role during the second World War. “Though in the later years, this prowess of ours declined, still it shows that there has been no dearth of capabilities, neither then nor now”, he said.

Underscoring the importance of customization and uniqueness of the defence system for a surprise element over the adversaries, PM Modi said: “Uniqueness and surprise elements can only happen when the equipment is developed in your own country.”

PM Modi mentioned that this year’s budget has a blueprint for developing a vibrant ecosystem from research, design, and development to manufacturing within the country. About 70 percent of the defense budget has been kept for domestic industry only, he added.

After the defence Ministry released Positive Indigenization Lists of more than 200 defence platforms and equipments, the Prime Minister informed that contracts worth Rs.54,000 crore have been signed for domestic procurement.

Apart from this, the procurement process of more than Rs.4.5 lakh crore worth of equipment is at various stages. The third list is expected soon, he said.

The Prime Minister lamented the long-drawn process of weapon procurement which often results in a scenario where weapons are outdated by the time they are commissioned.

“Solution for this is in Aatmnirbhar Bharat and Make in India initiatives”, he emphasized. The Prime Minister lauded the armed forces for taking decisions while keeping the importance of Aatmnirbharta in mind.

The Prime Minister stressed the need to keep the pride and feelings of the jawans in matters of weapons and equipment. “This is possible only when we are Aatmnirbhar in these areas,” he said.

He noted that cyber security is no longer confined to the digital world but has become a subject of national security. “The more we deploy our formidable IT power in the defence sector, the more confident we will be regarding our security”, he said.

Noting the competition among the defence manufacturers for contracts, the Prime Minister said it often led to money-focus and corruption. A lot of confusion was created with regard to the quality and desirability of weapons. Aatmnirbhar Bharat Abhiyan tackles this problem also, he said.

He lauded the ordnance factories for being a shining example of progress with determination. The Prime Minister expressed happiness that seven new defence undertaking that was incorporated last year are rapidly expanding their business and reaching new markets. “We have increased defence exports six times in the last 5-6 years. Today, we are providing Made in India defence equipment and services to more than 75 countries”, the Prime Minister added.

As a result of the government’s encouragement to ‘Make in India’, the Prime Minister said that more than 350 new industrial licenses have been issued for defence manufacturing in the last seven years. Whereas in the fourteen years from 2001 to 2014, only 200 licenses were issued. The Prime Minister also said that the private sector should also come on a par with DRDO and defence PSUs, hence 25 percent of defence R&D budget has been kept for Industry, start-ups, and academia. The Special Purpose Vehicle model has also been arranged in the budget. “This will establish the role of the private industry as a partner beyond just a vendor or supplier”, he said.

Transparent, time-bound, pragmatic, and fair systems of trial, testing, and certification are essential to the growth of the vibrant defence industry, PM Modi said. For this, an independent system can prove useful in solving problems, he added. 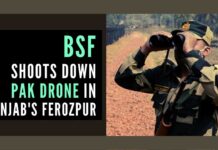 Centre keen on working for revival of Saraswati river with Haryana...