The geopolitical situation triggered by the Russia-Ukraine war which led to supply chain constraints, rising energy prices, and pushing inflation to the highest-ever levels in several countries is the factor that combined together has compelled India to continue to depend on coal-based thermal energy.

India is aiming to achieve net-zero emissions by 2070 by focusing on green energy options and yet its dependency on coal sees a surge.

India’s dependence on coal can be gauged from the fact that owing to the shortage of fossil fuel in thermal plants, Coal India, the country’s largest producer, was in June this year, forced to import 8 million tonnes of coal for this fiscal.

It was for the first time in the 50 years of Coal India’s existence that the public sector undertaking was asked to import the dry fuel.

Recently, Union Finance Minister Nirmala Sitharaman said that uncertainties in the energy sector are an area of concern for the government.

She noted that like many other nations, India too will have to rely more on coal in the near future due to global uncertainties and supply chain disruptions.

The Finance Minister even said that India’s plan to shift to renewable energy has received a jolt and therefore ways to reduce coal dependency and return to eco-friendly energy resources, need to be devised.

“As part of the COVID-19 recovery plan, the government opened up its coal mining sector for private players and announced many new coal mines for auction. This new investment planned for coal power plants can impact the progress of clean energy. Ideally, these investments should have been for renewables,” he said.

Kumar further informed that in light of the fact that coal is increasingly becoming economically unviable and the cost of renewables continues to drop, there is a need to phase out of coal soon.

In such a scenario, the COP27 summit, which is currently going on in Egypt’s Sharm El-Sheikh, is deliberating on the need for climate funding and on ways to reduce dependence on traditional modes of energy like fossil fuels.

In fact, there are voices being raised at the summit, especially by developing economies that major polluters like China should be made to pay towards a climate fund.

India too on its part has been a strong promoter of renewable energy, as it has launched the International Solar Alliance (ISA), encouraging over 150 countries to take advantage of this international initiative.

Recently it also launched LiFE (Lifestyle for Environment), a global movement encouraging people to change their lifestyles and consumption patterns in order to protect the environment.

Ironically though, India has been forced to depend on coal-based energy options due to shrinking global supply chains and rising fuel prices owing to the Ukraine crisis.

Though the Central government is calling its dependence on coal as a temporary phase, it does hamper its efforts to push for greener options. PM Modi’s Diwali gift to 75,000 youngsters; to give appointment letters of government jobs 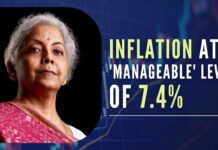 Inflation at ‘manageable’ level of 7.4%, govt working to bring it under 6 percent: Nirmala Sitharaman