[dropcap color=”#008040″ boxed=”yes” boxed_radius=”8px” class=”” id=””]A[/dropcap] year or so ago, every news of farmer suicides evoked a cry of “Farm waiver” from Rahul Gandhi and his sycophants. It was thought to be a panacea for farmers’ miseries. The only argument put forward in its favour was “If big corporate companies were only adding to our Non-Productive Assets (NPAs) of the lending banks and ending in their outstanding loans being “Written off” in the lending banks’ balance sheets, why should the farmers’ loans not be similarly treated? Or, simply, waived?

The problem here is that Rahul Gandhi and his likes just do not understand some truths of banks’ NPAs.

The text highlighted (by the author) in the letter below of the RBI to “The Indian Express” newspaper should, hopefully, clarify the situation to these ignoramuses of our political class.

We refer to the article published in today’s (February 9, 2016) Indian Express under the headline Rs1.14 lakh crore of bad debts: The great government bank write-off’.

Though based on our response to an RTI query, the news item lacks right perspective and does not bring out all the facts involved in such writing off of loans.
‘Writing off’ of non-performing assets is a regular exercise conducted by banks to clean up their balance sheets. Substantial portion of this write-off is, however, technical in nature. It is primarily intended at cleansing the balance sheet and achieving taxation efficiency. In ‘Technically Written Off’ accounts, loans are written off from the books at the Head Office, without foregoing the right to recovery. Further, write offs are generally carried out against accumulated provisions made for such loans. Once recovered, the provisions made for those loans flow back into the profit and loss account of banks.

The data published in the above news item is the total write-off made by banks, which includes a large portion of technically written off accounts where the recovery efforts continue as usual.

[dropcap color=”#008040″ boxed=”yes” boxed_radius=”8px” class=”” id=””]I[/dropcap]n contrast to the outstanding or overdue corporate loans given by recognized financial institutions, “farm loans waived” are simply swept away, lost, for ever, to the economy. The bankers of course are reimbursed by the State, but the economy is rendered poorer. They become a burden to the taxpayer who is likely to face further taxes to reimburse the State exchequer for the “waived” amount or is forced to suffer reduced services/aid from the State because of cuts in the State’s oncoming expenditure budget. It’s really an ‘appeasement” policy and a perverse welfare activity that’s hazardous to the economy as a whole, especially when a progressive crop insurance scheme is in existence with State financial support.. And it is usually preceded by a lot of political nautanki, melodrama and loud agitations.

Now, pressure s being built by Tigers and Pappus on the Maharashtra Government.

That is how one can perceive the Rs. 36,359 crores waived in mid-March this year by the newly formed BJP government of Uttar Pradesh. This amount included the amount outstanding as on 31st March 2016 of Rs. 30,729 crores against small and marginal farmers, and Rs. 5,630crores of 7 lakh farmers whose accounts were declared as NPAs by banks. (Note that NPAs of farmers’ loans were first written off by an earlier government and then recovered from the State and its tax payers.). This total bounty of Rs. 36,359 crores is intended to wipe off the debt, of up to Rs. one lakh per farmer, of 94 lakh farmers. By the way, “marginal farmers” are, in UP, determined to be those who have land holdings of less than one hectare (2.5 acres), while those with land holdings of 1-2 hectares are considered as “small farmers.” Mercifully, the UP Government has accepted its liability and announced that it will not approach the Centre for financial assistance in this matter.

[dropcap color=”#008040″ boxed=”yes” boxed_radius=”8px” class=”” id=””]T[/dropcap]he Tamil Nadu High Court, unfortunately, crossed all limits in shedding tears of sympathy. To the late J.Jayalalithaa’s election manifesto promise of waiving off the outstanding loans of Rs. 5,7801 crores against 6.94 lakhs of small and marginal farmers, this Honourable Court felt that the State’s loan waiver to only small and marginal farmers was “discriminatory” in leaving out “other” farmers. It ordered that “all” farmers be given the loan waiver, and never mind that it caused an additional burden of Rs. 1,980 crores on the State. This total burden of Rs. 7,760 crores will, once again, be a blow to the tax payer.

What’s more, that Honourable High Court wanted the Centre to extend a helping hand to the Tamil Nadu State. Since when did money start growing on trees, your Lordships? The two honourable ones on the Bench probably hadn’t seen large numbers of Tamil Nadu farmers at New Delhi’s Jantar Mantar shouting slogans showing a bare body showing flab of flesh. Incidentally, who paid for their journey from their State to New Delhi? Who paid for their board and lodge for nearly a month in the capital city?

And now, pressure s being built by Tigers and Pappus on the Maharashtra Government. The latter has estimated that if the waiver is confined to districts where the maximum suicides have taken place, it would amount to 8.2 lakh farmers with total loans of Rs. 11,200 crores. If restricted to only small and marginal farmers, it would amount to Rs. 23,837 crores benefiting 4.92 lakh farmers.

Clearly, a uniform policy across the country is required if the States in India want the Centre to help them overcome the farming community which S.M Swaminathan described as the riskiest entrepreneurship.

[dropcap color=”#008040″ boxed=”yes” boxed_radius=”8px” class=”” id=””]F[/dropcap]or instance: Should a farm loan waiver scheme apply only to short-term (one year) loans or to all farm loans where loans are taken for two or three-year term, such as for storage in godown, digging a well on the farm, etc. Again, since a crop loan includes personal expenditure as one of the purposes (apart from purchase of seeds, ploughing, harvesting etc) and since the total loan sanctioned (determined on pre-district parameters of soil quality, water availability etc) is disbursed fully, at one go, why should wasteful expenditure by the farmer — such as daughter’s marriage— not excluded from the waived amount? In fact, inclusion of such expenditure in the loan amount makes “Farm Loan” a misnomer.

Most importantly, why should the loan waived amount not be recovered in installments from the wages received by the farmer and/or his family members from the MGNREGA scheme?

And why shouldn’t the scheme include a reward/incentive for those who fully repay their loan in time? Is the current 3% subvention on interest enough for them?

The whole object of a farm loan waiver scheme should be to curtail freebies to farmers, instill a spirit of discipline among them, and, above all, encourage them to be totally honest in dealing with money from the hand that feeds him first before they fed themselves with their hard, honest work with skill and dedication. Now who is the real Buddhu? 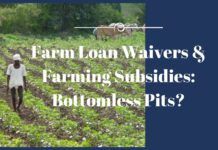