But what kind of narrative should the BJP push to show that it is they – and not the Sena – who now have the ‘blessings’ of Balasaheb?

Many BJP supporters were unhappy when its leader Narendra Modi while campaigning for the party before the 2014 Maharashtra Assembly election, chose to keep the estranged ally, Shiv Sena, away from the line of verbal attacks. The 25-year-old alliance of the two parties in Maharashtra had freshly ended, owing to failure to reach an agreement over sharing of seats in the soon-to-be-held election. Both parties now contested the elections separately, and hence were in effect each other’s rivals. Shiv Sena chief Uddhav Thackeray treated the BJP as such, and would even go on to launch a scathing personal attack on Modi, claiming that even Modi’s father couldn’t have won a majority in the Lok Sabha elections held earlier that year without Sena’s support. Modi‘s attitude towards the Sena, however, was very different, and this was how he explained it in a public meeting in Tasgaon in Sangli district:

“This is the first election in Maharashtra to be held in the absence of Balasaheb Thackeray. So I have decided to show my respect for him, I will not speak a word against the Sena.”

Of course, Modi might have known that his party would have needed Sena’s support eventually to form the government and so he didn’t want to make Uddhav too angry, but the main objective behind being so nice to the ally-turned-rival (with regard to the state) can probably be seen in the reason he gave for such special treatment: that this was his way of paying homage to the late Shiv Sena Pramukh.

“When I die and meet Balasaheb Thackeray in the afterlife, I can confidently say that I have done good work. Will you be able to say that?”

Modi would invoke Balasaheb again almost two years later when MPs of the Sena – a party which now had a well-developed habit of criticising its old ally — would meet him over the central government’s demonetisation of Rs.500 and Rs.1000 notes. The Sena had joined the Trinamool Congress-led march to the Rashtrapati Bhavan which protested against the currency call, but their leader Uddhav was left no choice but to ‘thank’ Modi when he reportedly
said this to the Sena delegation: “When I die and meet Balasaheb Thackeray in the afterlife, I can confidently say that I have done good work. Will you be able to say that?”

Yeah, you see, Modi considers Balasaheb important and deserving of a conspicuous and respectful place in his discourse, but before we talk more about Balasaheb’s importance, let’s consider the thing that perturbs the more liberal BJP supporters: should Modi try to associate himself at all with ‘someone like Balasaheb’? Obviously, he was vocally supportive of Hindutva and vocally anti-communist since the 1970s, so clearly he had ideological qualities to be one of the right-wing poster-boys. Yet, many of the statements that he made in his career would embarrass even many of the hardliners from the Sangh Parivar. Consider this interview of Bal Thackeray in the Aap Ki Adalat programme of India TV. Often we see that a hardline politician may make a controversial statement in a public rally but chooses to be a lot more moderate and cautious while sitting in a TV studio. What about Bal Thackeray here? From ‘Supreme Court…woh court mai na manta [I don’t believe in that court]’ to ‘dictatorship chahiye [dictatorship needed]’, from ‘Purey Hinduoko desh mei militancy lani paregi [All Hindus have to bring militancy in the country]’ to ‘I don’t have that wretched democracy in my party’, Balasaheb keeps making remarks that Modi would like to keep a million light-years away from his discourse of ‘New India’.

To build ‘New India’, you need to be in power with strong numbers, and to be in power, you have to get your politics right along with your performance.

Yet Modi knows that giving Balasaheb an important place in the present discourse of the BJP in Maharashtra will only help him build the ‘New India’. Because to build ‘New India’, you need to be in power with strong numbers, and to be in power (let alone with strong numbers), you have to get your politics right along with your performance. Now of course, if things had been all nice between the BJP and the Sena, Modi could easily have the strong numbers in Maharashtra (both centre-wise and state-wise) for quite some time in visible future. But the relationship between the two parties has been sour for too long now and it seems more than likely that the BJP will contest the 2019 Lok Sabha and Maharashtra Assembly elections without the support of the Sena, which is not prepared to embrace the BJP as the big brother in the state.

But can the BJP conquer Maharashtra with big numbers in 2019 without the support of the Sena? They may, or may not, but what will definitely boost their chances of doing so is their getting their charismatic cards right, and two late regional charismatic figures must surely be a significant part of their discourse: one is the 17th century warrior king Chhatrapati Shivaji Maharaj and the other, obviously, is Balasaheb Thackeray. The BJP has already started making efforts to wrest the legacy of the former from the Sena, as can be seen from how the senior ally last year not only turned the laying of the foundation stone for the Shivaji memorial into an extravagant event but also chose to keep the Sena out of the advertisements about the memorial that the Maharashtra government issued. And perhaps, the time has come when they need to do the same usurping with regard to the founder of the Shiv Sena itself.

Of course, the BJP need not agree with everything Balasaheb said to make him their own. Indeed, political parties often claim the legacy of renowned historical figures even though those figures might have made statements which are inimical to the kind of political discourse those parties want to propagate. Think of Mahatma Gandhi and Babasaheb Ambedkar – two eminent personalities whose legacies are claimed by both the Congress and the BJP. Now consider this quotation of Gandhi from his book Hind Swaraj: Indian Home Rule: “If the machinery craze grows in our country, it will become an unhappy land. It may be considered a heresy, but I am bound to say that it were better for us to send money to Manchester and to use flimsy Manchester cloth than to multiply mills in India.” Or this statement of Ambedkar on Oct 11, 1951: “The right solution for the Kashmir issue was to partition [Jammu & Kashmir]. Give the Hindu and Buddhist parts to India and the Muslim part to Pakistan as we did in the case of India.” Hmm. Yes. As you can you see. Neither the Congress nor the BJP would at present choose to invoke these statements of the heroes they publicly worship.

Balasaheb’s Shiv Sena passed away with Balasaheb in 2012. A greedy traitor rules the present Sena.”

But what kind of narrative should the BJP push to show that it is they – and not the Sena – who now have the ‘blessings’ of Balasaheb? Look no further than Raj Thackeray. Of course, Raj broke away from the Sena when Balasaheb was alive and so it was natural that no matter how much he claimed to respect his ‘mentor’, his ‘mentor’ would have always disowned him and he would never be able to get rid of the ‘one who betrayed Balasaheb’ tag. Also, the fact that he treated the Sena as a rival – with Balasaheb being alive – meant that he couldn’t succeed in establishing himself as the ‘real successor’ to Balasaheb. So, yeah, Raj represents the ‘Betrayal of Balasaheb’ discourse. And what the BJP needs to do is only make Uddhav a part of it.

Sounds difficult? Yes, it is. But certainly not impossible. How about this narrative as a possible option during the campaigning for 2019 elections: “Raj out of hunger for power left the Sena and betrayed Balasaheb. But the reality is, BOTH Raj and Uddhav have betrayed Balasaheb out of greed for power. Uddhav during the last 5 years left no stone unturned to help the Congress and the NCP, who were Balasaheb’s biggest enemies. Out of power hunger, he even joined hands with Mamata Banerjee, who is the most anti-Hindu politician in the country and would have been Balasaheb’s biggest target if he were alive today. Balasaheb’s Shiv Sena passed away with Balasaheb in 2012. A greedy traitor rules the present Sena.”

It was easy for Uddhav to attack Modi’s father in 2014 before the Maharashtra Assembly election, but it won’t be easy for him to deal with Modi if Modi praises Uddhav’s father to an extent where Uddhav himself becomes the expense. And who knows, maybe that is exactly what the BJP leader is planning to do.

Follow me
Pulaha Chaudhuri
Pulaha holds a Master's degree in English from the University of Calcutta. He is a keen observer of political and economic happenings in India. Follow him on Twitter at @PulahaChaudhuri

Follow me
Latest posts by Pulaha Chaudhuri (see all) 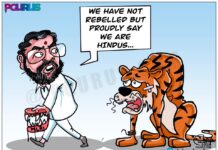 LIES do pay! Got three in my bag already. Got to...