GST eliminates such multi-stage taxes, and taxes on taxes

[dropcap color=”#008040″ boxed=”yes” boxed_radius=”8px” class=”” id=””]G[/dropcap]ST is meant to be revenue-neutral but is expected to bring in more businesses into the tax net, making it difficult to evade taxes, generating more revenues for the Government and strengthening the economy to make our lives better.

Strictly speaking, such profiteering should not happen, as in a free market, prices should find their natural, fair levels (unless there is oligopoly or cartelization)

There is a lot of confusion about ITC (Input Tax Credit). Many wonder whether manufacturers and value-adders should pass on ITC to them.

[dropcap color=”#008040″ boxed=”yes” boxed_radius=”8px” class=”” id=””]L[/dropcap]et’s understand this through an example of company X manufacturing mixie. Mixie has several components, the main ones being a plastic base, jars with blades, a motor and an electrical assembly. Let’s say X manufactures the jar with the blades, buys all the other components, assembles them all in its own brand name, and sells to distributors.

The manufacturers of the plastic base, the motor and the electrical assembly (who supply to X) buy their raw materials/ components, make them into sub-assemblies and sell to X, paying the appropriate taxes. Except for VAT, all other taxes become an integral part of the cost of these components; VAT alone remains a tax and gets carried forward as a tax.

[dropcap color=”#008040″ boxed=”yes” boxed_radius=”8px” class=”” id=””]W[/dropcap]hen X manufactures the jar with blades, assembles the mixie, and sells to distributors, the mixie suffers VAT (where there is ITC) and the other appropriate taxes. Apart from suffering taxes cumulatively (e.g., as motor once and as mixie the next time), it also suffers taxes on the taxes already paid, except for VAT, as these taxes have also been embedded as part of the cost. E.g., Octroi, Cess etc get added to the cost of the motor and become a cost of a motor to X.

GST eliminates such multi-stage taxes and taxes on taxes.

Also, there are many indirect costs like advertising, rent, power, telephones, water, auditor fees, training fees, hiring of staff, full time as well as on contract, all through third party service providers, etc on which GST would be paid, and these are also available as ITC, which was not the case before GST.

[dropcap color=”#008040″ boxed=”yes” boxed_radius=”8px” class=”” id=””]O[/dropcap]ne of the questions that laypeople ask is, “Why is the ultimate retailer charging the entire GST on me? The manufacturer, the distributor and the retailer have got their input credits. Won’t they pass on these credits to us?” This comes from a misperception. The fact is, GST is to the ultimate consumer at the ultimate “sale + service” value. Each of these entities is only collecting GST at their value add the amount, pass on to the Government, and recover from us. So, yes, the ultimate retailer is entitled to charge the entire tax from the ultimate buyer.

But there is another very important issue that most people don’t understand. The cost of mixie after GST should come down (or remain the same in some cases), though GST may be higher/ lower depending on the product/ service. This is because, unlike a pre-GST period, there are no “taxes after taxes” and “taxes on taxes” now, but only one tax, that too with input credits at each stage.

So, unlike the pre-GST regime, the costs and value added should be separated from taxes now. Hence, taxes on taxes also won’t apply.

[dropcap color=”#008040″ boxed=”yes” boxed_radius=”8px” class=”” id=””]S[/dropcap]o, strictly speaking, the cost of all items should come down (or remain the same in some cases), regardless of the industry. GST may make it costlier in some cases, and cheaper in some others. This is what is shown in the TV and newspaper summaries of ‘what’s costlier and what’s cheaper’.

It is this point that is missed by most people. And individual business & industry could take advantage of it and try to enhance their profits.

Strictly speaking, such profiteering should not happen, as in a free market, prices should find their natural, fair levels (unless there is oligopoly or cartelization). Normally, regulatory methods to correct market distortions should be the last resort, a threat almost never executed.

What can the Government (or even media) do to prevent such stealthy profiteering?

The ideal thing to do is to facilitate free market forces to act. For example, if the Government (or media) creates a portal where the sellers at different places across the country can mention the prices and GST at which they sell different (branded and unbranded) items, at least during the initial 3-6 months of implementation of GST, displaying only the best 7 prices or so, then this will create a free market. Those who overcharge (within and across brands in the same product category) will be exposed. People can have an idea of the right price of various items before they buy. This will prevent profiteering. 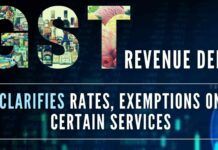 Mr. Modi, here is a simple way to solve the farmers’ stir

SEBI: Between a rock and a hard place