The veteran cricketer, Harbhajan Singh’s latest statement has taken cricket fans aghast. He has claimed that M S Dhoni and some Board of Control for Cricket in India (BCCI) officials were responsible for his Team India ouster.

Harbhajan told the media, “Luck has always favored me. Just some external factors were not by my side and maybe, they were completely against me. This is because of the way I was bowling or the rate at which I was moving ahead. I was 31 when I took 400 wickets and if I would have played another 4-5 years, keeping in mind the kind of standards I had set for myself, I can tell you that I would have taken another 100-150 wickets or more.”

He further revealed, “Yes. M S Dhoni was the captain then but I think this thing was above Dhoni’s head. To a certain extent, there were some BCCI officials who were involved in this and they didn’t want me and the captain may have supported that but a captain can never be above the BCCI. The BCCI officials have always been bigger than the captain, coach, or the team.”

The Indian off-spinner, Harbhajan Singh announced his retirement from all forms of cricket just a few days back. Why this Kohli-veri? What comes goes around comes around, Virat Kohli I Sree Iyer 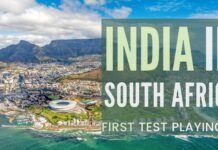 Why India should have different players for different formats

DDCA caught between a rock and a hard place