It was history repeating itself. Over 25 years ago thousands of Hindus of Kashmir valley were attacked and made to flee their homes. And now Hindus of several villages of 24 Parganas in Mamata’s West Bengal have been rendered homeless by Muslim mob incensed over a FaceBook meme.

Senior advocate of the Supreme Court, Prashant Bhushan, who incidentally is a 24×7 Modi basher, tweeted a totally blasphemous remark about Lord Krishna.

Many people are heavily criticizing Mamata Bannerji of failing to nip the blatantly anti-Hindu riots. She has been accused of being anti-Hindu and again justifiably so.

But I would like to ask these critics, many of whom belong to the BJP if their own governments in the states are any different.

Take the example of Devendra Fadnavis, BJP Chief Minister of Maharashtra. Among other things, he holds the home portfolio. Senior advocate of the Supreme Court, Prashant Bhushan, who incidentally is a 24×7 Modi basher, tweeted a totally blasphemous remark about Lord Krishna. I filed a written complaint with the Chembur police in Mumbai, in whose jurisdiction I live, under Section 295A of the Indian Penal Code with a request to register a First Information Report (FIR) against Bhushan. The police refused. I begged Fadnavis and several persons in the BJP to get the police to register my FIR but in vain. I have now filed an application before the Kurla metropolitan magistrate’s court under Section 156 (3) of the CrPC to direct the Chembur police to file an FIR. The matter is still pending. All these efforts just to register an FIR.

Earlier I had moved the Bombay High Court in another matter and got an FIR registered against, among others, Vineet Jain, the Managing Director of The Times of India Group, and three of his employees by the Samata Nagar police in Mumbai for publishing photographs on the front page of Bombay Times, photographs highly derogatory of several Hindu deities. But no action was taken on my FIR. I requested several BJP leaders, including Fadnavis, to act on my FIR which I had got registered after a lot of effort. Now I learn that the police has closed the case and that too without bothering to inform me, the complainant.

In Chembur, local Hindus have been complaining bitterly about a totally illegal masjid built on the mega city nallah which results in waterlogging in monsoon. The illegal loudspeakers disturb patients in a public hospital nearby. Any number of complaints have been made by the persons concerned. But, all in vain.

A prominent Congress politician has settled 25,000 Bangladeshis in Bandra so as to form a vote bank. Despite several complaints, the police under Fadnavis have failed to act against these large number of illegal migrants.

The proverbial icing on the cake is the rejection by the police of my application to convert Dawood Ibrahim’s hotel near his erstwhile home in Bhendi Bazar in central Mumbai into a police chowky. The hotel is one of the seized properties in the custody of the government. A chowky at that spot would have conveyed its own message to the Karachi-based don who is known to back anti-Hindu terror network. If a police chowky is not needed in Bhendi Bazar, then where is it needed? In Ramakrishna Mission… I guess.
Note:
1. Text in Blue points to additional data on the topic.
2. The views expressed here are those of the author and do not necessarily represent or reflect the views of PGurus. 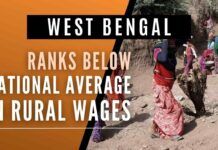 Sree Iyer on why are states like Punjab and West Bengal rattled with more power to the BSF?