Karnataka Cabinet approves Anti-Conversion Bill; will be tabled on Tuesday

The Karnataka Cabinet has cleared the much-debated Anti Conversion Bill which prohibits conversion from one religion to another by misinterpretation, force, fraud, undue influence, coercion, allurement, or marriage.

The Basavaraj Bommai led government in Karnataka cleared the ‘Karnataka Protection of Right to Freedom of Religion Bill, 2021’, in the cabinet on Monday. This proposed law is aimed at penalizing people who convert by fraudulent means or by marriage.

Karnataka Home Minister had confirmed earlier that the government will bring a clause to existing Article 25 of the Constitution which permits for a person to choose a particular religion, however, it lacked any clause to punish those involved in illegal religious conversion.

According to the Prohibition of Conversion Bill, no person or community can be forcibly converted. If the person is to be converted or held, the application must be made 2 months before the competent authority. The process of conversion is not confidential to safeguard the privacy of a person who wishes to become a convert and a religious right.

According to sources, the bill is most likely to be tabled in the Assembly on Tuesday. 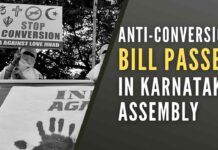